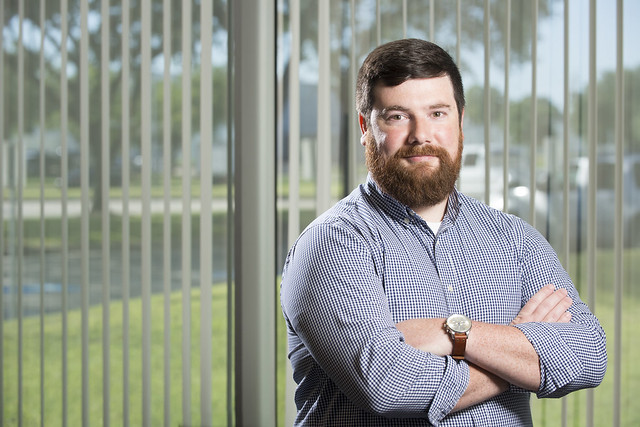 In 2004, Christopher Jenkins was attending North Carolina State, studying mechanical engineering. But by his third year there, he realized it just wasn’t what he wanted to continue studying.

“I looked at it and I didn’t have a passion for it,” he said. “I had really been thinking about taking some time off and working so that I could get some more life experience in order to see what I really wanted to do.”

A friend’s father worked at Graybar and suggested Chris consider a then-open position at Graybar in Winston Salem, N.C.

“He offered to put in a good word for me,” Chris explained. “And that’s how it started. I put in the application with Graybar and went through the interview process and was fortunate enough to get the job.”

While he’s been with Graybar ever since, Chris admits that first day was eye opening.

“It was very challenging. I showed up wearing khakis and dress shoes because I really didn’t know what I had signed up for,” he laughed. “I can still remember going in and I had to load conduit, wearing khakis and a dress shirt! It was a very, very quick introduction to what we do.”

Chris explained that he probably learned the most while working at the sales counter—knowledge he uses to this day.

“The counter really encapsulates what we do,” he explained. “You’re doing so much. Even as I moved into the office, I continued backing up the counter because I always thought it was important to have that relationship. I felt like I learned so much there that I always wanted to have that connection.”

While he was succeeding at Graybar, Chris nonetheless decided to go back and complete his bachelor’s degree. After a friendly shove.

“Our district branch administrator said, ‘Why didn’t you finish school? You’re too smart not to have a degree.’ I remember telling myself that when I make it to a city where I could work and go back to school at the same time, I would do it,” Chris explained. “But then she said, ‘Well, hello! You’re here now.’ And the very next day I started looking around for programs that I could work and have evening classes.”

Chris went on to get his BA in business administration degree ECPI University in Virginia.

Now living and working in Houston, Chris has seen firsthand how the city and region is recovering from Hurricane Harvey.

“There is a lot of cleanup effort still going on, with the insurance agencies and adjusters trying to make their rounds and do site surveys and figure out what needs to be done,” he explained.

He is single, enjoys golf and skydiving and is currently learning how to fly gliders.

Like the rest of Houston, Chris enjoyed the Houston Astros recent run toward their World Series championship—especially satisfying for the hurricane-ravaged city.

“Everybody really was engaged in following it more than I’ve seen in the past,” Chris said. “It could be just because it was the World Series but it felt like people were looking for something to sink their thoughts into after the hurricane.”

A. The best advice I can give is to seek a mentor. Find somebody whom you can talk to and who will give you the correct advice. A lot of people will tell you what you want to hear but you need to find somebody who is going to tell you what you need to hear. That is the best advice I can give. The best mentors in my career have been the ones that ticked me off when they told me their advice. But those are the things that forced me to go back and really rethink the situation. So find a trusted mentor. That is the key.

A. The biggest changes are with the competition and how technology is shaping how we perform our daily tasks. Everything now has an immediate sense of urgency. That is not new to the industry but it is becoming more and more prevalent. The expectations of our suppliers and our customers are for us to be able to handle things with as much agility as possible, and as quickly as possible. We are expected to have the product. We are expected to service it.

It is still a relationship business but now we are competing with companies like Amazon who have such a strong platform. We have always been driven to provide as good a customer service as possible. But now we are not only competing with the expectations of our industry but also with what people are accustomed to in their daily lives—when you can order anything from Amazon and have it within two days. It’s not like when people go to work they just forget that kind of service.

We as distributors have to work harder and harder to understand the market and know what products we have to have so that we can provide that level of service without pricing ourselves out. All of those things come at a significant cost and we have to figure out how to balance those more than we’ve ever had to in the past.

I worked with Chris at the counter in the Graybar Winston branch. He was a quick learner and took his job seriously. He would read computer programing books and I thought this is not your average dude. Also he was a very good friend of mine. Wish him the best.