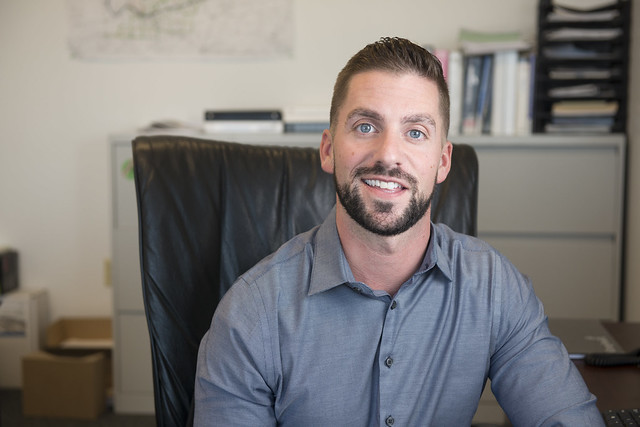 While J.D. Henigman grew up in the St. Louis area—where Graybar is headquartered—you could say he took more of a roundabout route in getting there.

“Before Graybar, my previous employer was also a distribution company, Midwest Medical Supply,” J.D. said. “I worked in warehousing and logistics for that company for four or five years, right out of high school.”

A colleague at Midwest Medical left to take a position at Graybar and gave J.D. positive feedback about working there.

“He told me where he was going and what a great opportunity it was if I wanted to interview for another position at Graybar. So I took the chance and applied,” he explained, and started at Graybar in 2010.

Those first couple of weeks saw J.D. realizing just how large his new company was. But his previous distribution background did help somewhat, he said.

“I already understood warehousing and logistics pretty well from my previous position at Midwest Medical. So that definitely helped me,” J.D. explained.

However, Graybar and its many lines of product offerings were much more than he had been accustomed to.

“I also had to learn the scope of what we do, how many locations we have. The company that I came from was a regional distributor which had about 13 warehouse locations. Graybar has some 300 locations and several very large distribution facilities,” J.D. said.

He began working at Midwest Medical right out of high school. J.D. would go on to earn his associate’s degree in business from St. Charles (Missouri) Community College.

“I do not have the four-year bachelor’s yet. It has been extremely fulfilling for me to work my way up so to speak,” he said. “I believe our CEO started as a customer service rep. So there is no limit to how far you can go in this company.”

J.D. is the branch manager of Graybar’s Evansville, Indiana location where he has 22 people reporting to him. He expects to hire a 23rd soon.

“Overall it is really just about leading this branch and making sure that we are doing everything we can as a team to hit our targets and goals,” he said in summing up his day-to-day responsibilities.

James Daniel is his real name but, “I’ve never been called anything besides J.D. my entire life,” he explained.

He was born and raised in St. Louis. He is single. He is an avid billiards player and has played in several leagues.

“I haven’t had a chance to join a league here in Evansville yet. But I have been in leagues in just about every other city that I have lived in,” he said.

And he remains active in charities and community work.

“A long time charity I’ve been a supporter of is St. Jude’s Hospital. I was in Memphis for three years. I lived less than a mile away from the St. Jude’s main campus and headquarters,” J.D. said. “We did two fundraisers here last year for St. Jude’s so I am still active with the charity and I like to donate some time and fundraiser activities to that.”

A. That’s a question that I can answer in a lot of different ways. But one thing I will say is that there is a lot of value in hard work in this industry. There are a lot of opportunities for professional growth by showing a strong work ethic and always giving it your all.

I would say to anybody that is trying to make a way for themselves in the electrical industry is rely on your resources. Make sure that you are reaching out to your mentors. I know Graybar in particular has provided me with several excellent mentors who have really helped to mold and shape each one of my positions. I have learned a tremendous amount from our own internal resources.

So that is one thing I would say to anybody trying to get into our industry and especially here Graybar: lean on the experience and the knowledge that you have within your own buildings and utilize that to help your team and to help our company grow.

A. It’s the way that Graybar goes about not only promoting from within but also the mentoring programs that we have. I would say the most rewarding thing has been my being able to help people along in their careers and help people succeed by being a mentor to people in other branches and also being a leader within my branch. It has been really nice to be able to see people grow and succeed in their own careers.

By the same token, it’s been great to really have a solid support system within Graybar to be able to lean on and to be able to learn from each other. That has been one of the more rewarding things.