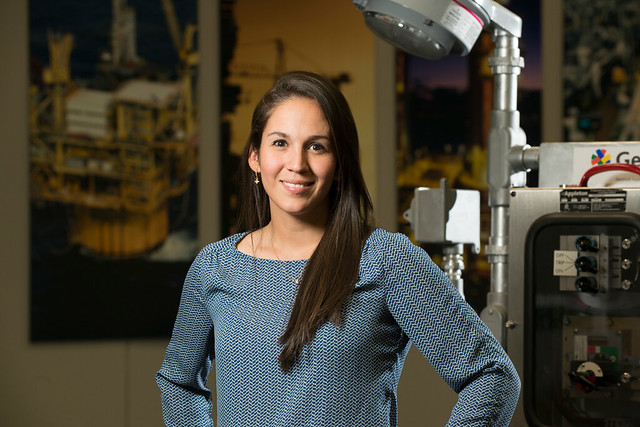 When Andrea Ramirez Dvoran entered Texas A&M, she planned to major in biomedical engineering. But she soon understood how much time she would spend in a laboratory, essentially alone.

“I didn’t mesh well, and quickly realized it was not a great fit for me,” Andrea explained. “I wanted to get to know people and build relationships.”

Her academic advisor in biomedical engineering suggested she consider A&M’s industrial distribution program. She took an immediate liking to the curriculum, and eventually was able to meet representatives from Gexpro where she soon began an internship.

“Growing up, I did not have a passion to go into the electrical distribution business; none of my family even knew about it,” Andrea said. “I came to Gexpro because of the people I spent my time with as an intern.”

Upon graduation in 2010, Andrea entered the company’s distribution services and leadership program, despite not knowing right away in what city she would begin her training. Turns out that Andrea would be starting in Denver, a long way from home.

“I grew up in Texas. My family is there,” Andrea said. “But it gave me the opportunity to get out and realize who I was. Each day I was put into situations where I was expected to perform. Those situations push you to think outside of the box and build relationships.”

She came to enjoy her time in Denver and made a lot of valued relationships there, she explained.

“It was a great opportunity to spend time in the warehouse, will call, and then at the counter,” Andrea explained. “Gexpro-Denver focuses on commercial contractors. That for me was a great way to learn product and also to learn the system.”

It was also Andrea’s chance to learn how to drive in snow—a lot of snow, sometimes.

“I had seen snow before but never had to drive in it,” she laughed. “And that was a challenge, I’ll say that.”

Before returning home to Houston, Andrea spent some time in Oklahoma City, implementing the Gexpro warehouse management system. It gave her a close-up look the company’s operational side.

Currently, as an account manager, Andrea is especially excited about the project she is working on.

“My current project is a large LNG facility under construction in southwestern Louisiana,” she explained. “We’ve been on that project since about 2015. That is my main focus, and has been for the past three years.”

Andrea includes exercise in her schedule. In the past she has run a few marathons. More recently, she has cut back to half marathons, she said.

“I try to keep in shape. You can stay busy but still exercise,” she explained. “And I think my mind is a little sharper when I do have a regular routine that includes exercise.”

Andrea and her husband Sean were married earlier this year (March). Despite their busy schedules, they enjoy playing golf. And even in the hot Texas summers, golfers are going to golf.

“We played yesterday afternoon. It was right around 100 degrees.” she laughed. “But we wanted to get one round in this weekend.”

Q. What motivational approach/tactic has been most effective for you in your career? That is, effective both for you individually and, if applicable, for those employees whom you manage?

A. I would say the overall feel of teamwork. The team atmosphere where you can say, “Hey, I’ve got this. But can you help me with this task?” It is mutual and you both have a stake in it. It could mean closing an order or just keeping a customer happy. You are sharing not only the risk but the reward. That, I think, has been pivotal for our team to make things happen. It often spawns more creativity and productivity.

I think approaching each and every day with the mentality of teamwork has been instrumental in keeping colleagues engaged. Plus, we also like to have fun.