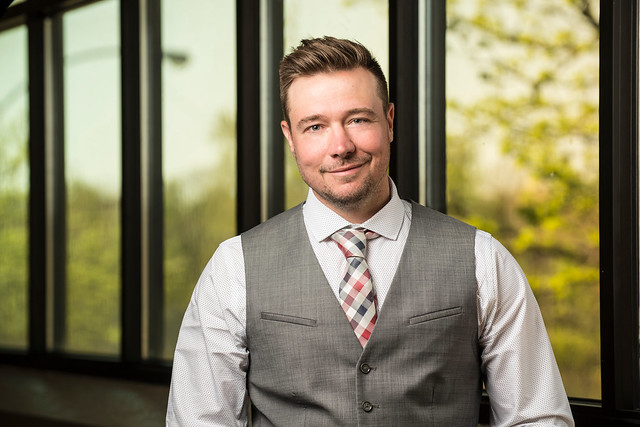 Michael Schinner, Jr. had a bit of an introduction to the electrical industry since his father worked at Killark Electric (a division of Hubbell).

Michael Jr. worked an internship at Killark while in college. He was initially studying to be a teacher but switched his academic major to mathematics, he said.

After graduation, though, he was undecided about where he would start his career.

“My father suggested I call the Killark HR managers to see if they had anything available for me,” Michael said. “I did and started off in the warehouse. I worked my butt off down there. It was very intensive labor.”

He enjoyed the work and the learning experience in the warehouse. But the person he worked under while an intern was still at Killark and remembered Michael well.

“He called me up to the office and he hired me on as a buyer,” Michael explained. “I was a buyer there for three years.”

From there he moved to the marketing side of things where he has worked ever since. His current title is product manager, fittings.

Like so many in this “30 Under 35” series, Michael enjoys the challenge of virtually constant learning that is vital to the electrical industry.

He points to one particular area, though, where he is especially keen on improving.

“Every year on my review there’s the question ‘What can you improve on?’ And every year I put the same thing: business. Business knowledge,” he said. “It’s always learning. I don’t think there is ever enough that you can learn about your business or any business in general.”

And his father, Michael Sr.? He’s still at Killark.

Much of Killark’s customer base is in the oil and gas industries, Michael explained.

“We are really working on trying to diversify and not be so dependent on oil and gas. We really want to get into some vertical markets that we haven’t really been able to tap into,” he explained. “We deal with mainly wholesale distributors. Without them, I don’t think we would be who we are today.”

Challenging though his schedule can be, Michael appreciates being at Killark, he said.
“It’s a great company. I love this company. We’re not the largest at what we do and I think that makes it more fun, makes it more competitive.” Michael said. “It gives you that drive.”

“I play a lot of sports, probably more than I should,” he laughed. “I’m in four softball leagues during the summer, playing four or five nights a week. Once summer and fall are over, I play indoor soccer until spring comes again and I go back to softball. That pretty much occupies a lot of my time outside of work.”

A. There is so much room to grow in your position in the electrical industry, whether it is manufacturing or distribution. I heard a lot of success stories from the 30 under 35 winners about how they started at an entry-level position and worked their way up to purchasing manager or branch manager or even product manager in such a short time because they kept the nose to the grind stone and worked as hard as they could.
I’m not saying go be that person who spends 60 hours a week in your office. But be that guy who volunteers for projects. Or, don’t be afraid to go out of your comfort zone to try and make something happen for your company. As long as your heart is in the right place, employees will take notice. Trust me.

A. I can’t speak for anybody else but being a proud Midwestern guy, our work ethic has always been very strong. It’s what we’ve been known for. What I can say about why people are enthusiastic about working in the electrical industry is that it’s such a great community. I have noticed people rarely leave this industry. They may pursue other career options or avenues, but it still pertains to this industry in some way. For most cases. I think it has everything to do with the people.