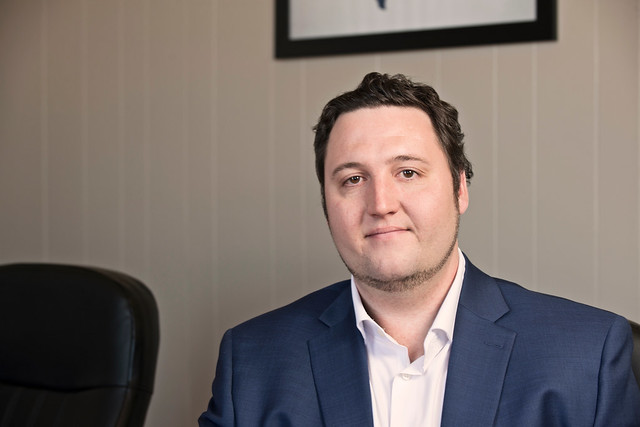 When Paul Maurer graduated from South Dakota State University in 2010 with a bachelor’s degree in economics, the economy—and especially the job market—were slumping.

“Originally, I was thinking of getting into the financial sector to use my economics degree,” he explained. “But that was around the same time when we were still in that recession, layoffs were happening. So trying to find a job at that time was pretty rough.”

A friend of his father mentioned a warehouse opening at Border States Electric’s Sioux Falls, S.D., location. While it may not have been what he had in mind coming out of college, Paul was eager to see what the electrical distribution industry was all about.

“After about three months in the warehouse, I had grown to really like the company and the culture,” he said. “I recognized very quickly the future that Border States could give me. So I figured that maybe I’d make a go at this and see where it would take me.”

He was in the warehouse for about a year when Border States transferred him to the corporate office in Fargo where he worked in purchasing for about three years. During his time in purchasing, he managed almost $14 million of utility inventory. He has worked for Border States in Denver since 2015 focusing on sales growth.

“I’m now involved more in the sales side of the business,” Paul explained. “That’s always been something that is very interesting to me.”

Paul is more than pleased with where his career path has taken him and he’s still using what he learned from starting in the warehouse.

“The warehouse experience was invaluable for me. There are a lot of people who deal with these materials in a computer system, but they don’t actually ever hold the materials in their hands or pick it, pack it, and then ship it out,” he said. “While I worked in the warehouse for a little over one year, all of that applies to what I do, even now. It set the foundation for me.”

“The bottom line is supporting my team. As long as I can keep putting them in positions to succeed, then I know that I will succeed, and the company will succeed,” Paul explained. “I am very integral with setting goals for all my team members to ensure aggressive sales growth. More of my responsibilities include developing and implementing processes for our key strategic accounts. Also, I do a lot of reporting and help with outside sales in terms of strategies, giving our account managers approaches from an inside sales perspective. I also work very closely with our branch manager.”

Paul and his wife Lindsay were married in June of this year. Living in Colorado, it’s no surprise that they enjoy the outdoors.

“We really like the mountains,” he said. “We try to get into the mountains and go off-road and find some random places to camp, preferably places without any cell phone reception.”

A. I would say patience and gaining perspective are imperative. Also, setting yourself up with a solid foundation—and I’m not saying you have to start in the warehouse, by any means—but always be looking for perspective and people who have a perspective to learn from. Not necessarily to get your career going faster, but to make it so you are more valuable to yourself, to your company, and to the industry. This will broaden your knowledge and help you grow professionally.

Usually, when people come into this industry they stay here, it seems like. The people make it unique that way.

Q. Why do you consider community involvement to be such an important part of a company’s mission? (Paul has been active in, among other charities, the Alzheimer’s Association and area food banks).

A. That’s giving back to our communities. I’ve seen studies showing that the majority of people who volunteer are happier than people who don’t. For me it is personal. It is just giving back whenever you can to somebody who maybe doesn’t have what you have.

Giving back and helping others is one of my main goals.