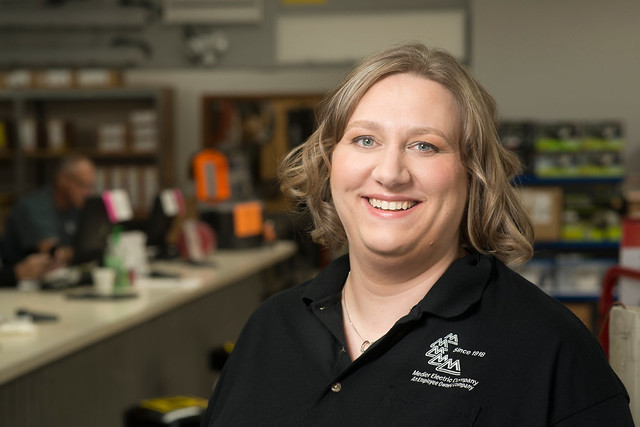 Like several of her “30 Under 35” honorees, Rhonda Messing’s start in the electrical industry came about somewhat by chance.

In 2007, she was working at a lumber yard. She enjoyed the work but not the irregular hours and weekend schedule.

“I was just looking for something that didn’t have weekend and holiday work. My father and brother were both electricians at the time and they had mentioned that there was an opening here at Medler Electric,” she explained. “So, I applied and here we are.”

Although she was switching industries, there were actually several customers from that lumberyard who were also customers of Medler. This helped in her adjustment to the new job, Rhonda explained.

“In working weekends and holidays at the lumber yard, there would be something that an electrician needed, and we were one of only two places in town that was open on a Saturday,” she said. “So, they would come and get a switch or box, or whatever they needed. I was familiar with about a third of Medler’s customers because they also bought material at the lumber yard.”

The Medler Electric branch (in Bad Axe, Mich.) wasn’t very large, she explained, meaning that employees did a number of jobs. Rhonda was able to become a versatile employee pretty quickly.

“I was learning about these products that are more than just what your normal hardware store would carry. I learned a lot of that during the first three years. We don’t really have a designation between counter and inside sales,” she explained. “Just learning terminology and the various options available – becoming familiar with the catalogs and everything— was really pivotal.”

In 2015 Rhonda was promoted to branch manager at Bad Axe.

“Our contractor base is the biggest portion of our business,” she explained. “They do a lot of residential and agricultural work, as well as some factory and industrial jobs. There are also hospitals, schools, and everything in between. If you need something electrical, we will sell it to you.”

Rhonda attended the NAED’s Women in Industry conferences in 2016 and 2017 and came away enthused.

“Every single woman in the industry should attend. It’s really fun and informative. There is absolutely no intimidation,” she said. “Everyone is very open and friendly. I request to go every year. It’s like a recharge for my system.”

Rhonda and her husband Rob have three daughters: Megan, eight years old; Emily, six years old; and Lilly who is two years old. They live on a working farm.

“We have cattle and crops. We grow soybeans, corn, wheat and hay,” Rhonda explained. “We are actually a really small-scale farm, just a couple of hundred acres.”

In addition to her children’s activities, Rhonda has hobbies of her own.

“One thing I like to do – this is going to sound so two generations ago— is I enjoy sewing, whether it is baby blankets and bibs or my kids Halloween costumes. I really, truly enjoy that. It just sounds so Betty Crocker,” she laughed. “And the other thing I enjoy is baking. I have a sweet tooth and so does my family.”

A. Lighting. They have reinvented the light bulb how many times recently? And the lighting industry continues to change. It’s crazy how much it is changing. Manufacturers are coming out with wireless fixtures where you can wire an entire school, for example, and all you’d have to do is get power to the switch and power to the fixtures. There doesn’t need to be a line between the switch and the fixtures anymore. Along with improvements in energy savings, that’s the future of lighting.

The other thing that has changed the most is with the Baby Boomers retiring, there are new ways to reach young talent. Not everyone reads a newspaper anymore, for example. You have to utilize social media and sometimes a website, instead of the traditional word-of-mouth or other methods.