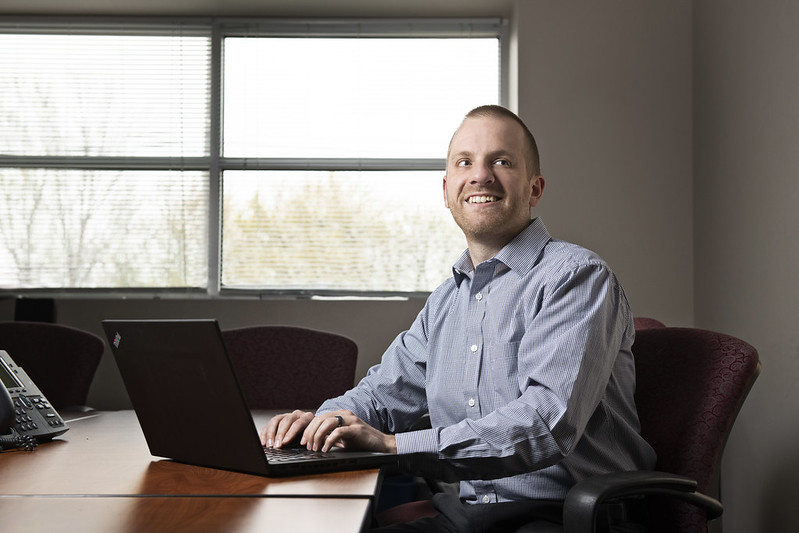 At one time, Ben Lutz was looking into a career in law enforcement, given his degree in criminal justice from the University of Wisconsin-Eau Claire.

Ben’s brother was working in the electrical industry at the time and enjoyed the work.

“He clued me in that one of Viking Electric’s branches here in Wisconsin was looking for warehouse personnel,” Ben explained. “I decided to take a shot and applied for that and ended up getting it.”

Thus, like many before him, Ben entered the electrical industry without having initially considered it as a career path. He started at Viking Electric in 2008 in its warehouse, picking orders and learning each day.

As he learned more and moved up in the company, Ben realized that what seemed like a good job to take out of college had definite career appeal for him.

“Once I started getting into the sales aspect of things, the industry started to grow on me,” he explained. “I’m learning how this stuff works and then seeing it out in the field and how these guys were using the products. I think it was just definitely an evolution type of thing throughout my career here. It was definitely something that I wanted to keep doing.”

Lighting and all its related product lines play a huge part in Viking Electric’s business and Ben’s involvement. It can seem like the innovations, and requisite learning, never stop which is fine with Ben.

“There’s so much that’s constantly changing, constantly evolving and getting better,” he said. “There’s a lot out there that do so many different things. It’s kind of cool with lighting that there is so much you can do, whether it’s something that’s color-changing or even just different effects you can get with it. And it’s fun to be a part of that.”

Most of Viking Electric’s customer base consists of electrical contractors, he explained.

“This market has definitely taken off over the last couple of years for sure,” Ben said. “There’s been a lot of growth in remodeling and new construction. A lot has happened here. There are a lot of people moving into the area too, which helps. So definitely a very, very strong market here right now.”

A native of Brookfield, Wisconsin, Ben lives with his wife, Kayla, and their dog, Kira. An avid runner, Ben has run several half marathons but completed his first full marathon last October, Milwaukee’s Lakefront Marathon.

A. I think for me, it is always to be customer forward. Make sure you’re getting the answers you need for the customer above all else. Even if you don’t have the answer right away, it’s making sure they know that you’re working on getting them the answer, and then doing what you have to do to get that answer.

You might not have the answer right now, but the biggest thing is just letting them know that you’re working on getting it and then doing what you can to get that answer. Don’t leave the customer hanging. That’s one of the worst things I think you can do because that means that guy’s going to go somewhere else to get it.

Some customers need the answer now and if you can’t get it to them, they’re going to go where they can to find it.

Q. If someone approached you during your freshman year of college and said that someday you’d be working in the electrical industry, what would your reaction have been?

A. In my freshman year of college my reaction would have been, “But I’m not an electrician.” (Laughing) I actually get asked this quite a bit—I say that I’m in the electrical industry and then somebody will say, “Well, are you an electrician?”

We supply product to electricians, of course, but in my freshman year of college, I never would have even heard about that or known about that. I mean, there’s a lot more to it, of course. There’s certainly a lot more depth to the electrical industry.