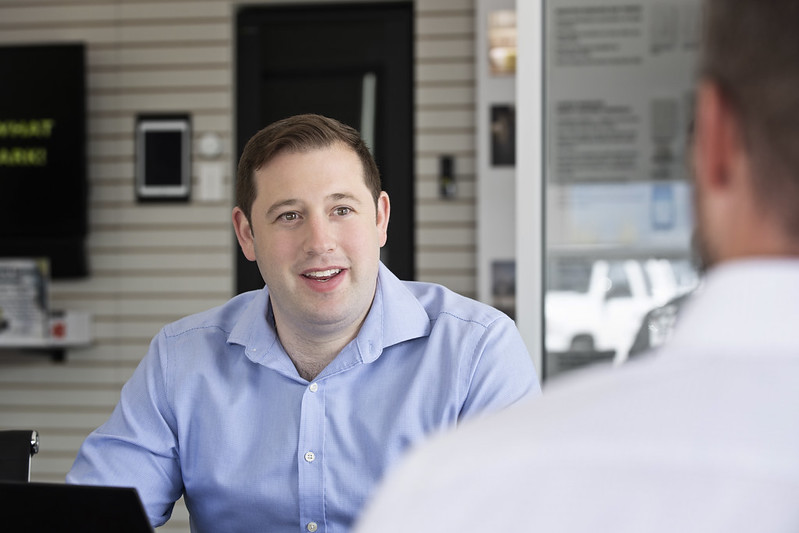 In 2011 Brad Lueck started his career at Wesco through a temp agency.

“I got an offer to start working as a temp in the warehouse,” he explained. “So I was actually a temp for three months.”

However, Brad’s enthusiasm for the industry quickly grew, as did Wesco’s interest in him. He was invited to join their development program.

“Every year they hire a group of post-secondary graduates and put them through a year with the company in locations all over North America,” he explained. “In my case, I was home in British Columbia. For me it was really about development as I took on many different roles and different training.”

Brad earned his BA as well as an MBA from Niagara University in upstate New York. The initial job market wasn’t particularly great, he said, so he was glad to have found Wesco.

He enjoyed the daily challenges of learning as much as possible about Wesco’s business and the industry itself. Soon he worked his way up the ladder. He also received a good piece of advice early on and tried to live by it.

“‘Bloom where you’re planted.’ That was said to me when I first started at Wesco,” he explained. “And I think I always took that very seriously. No matter what position you’re in, do it to the best of your ability and always try to learn and be better.”

As part of his “blooming” phase, Brad sat down with the head of Wesco’s British Columbia region at the time, Steve Crocker, and discussed where he wanted to go in his career.

“We had discussions about where I wanted to see myself down the road and then kind of put a plan together,” Brad explained. “And I’ve been very fortunate with the timing in a lot of cases so that the plan has sort of happened a little faster than expected.”

He pointed to the time when he was a Wesco district manager as an important career step.

“I would say as a district manager was where I made the biggest strides in learning about people and leadership,” Brad said. “That was the first real exposure and opportunity to be a leader and learn a lot about people.”

In late January, Brad was appointed Director of Operations for Wesco in the Province of Alberta.  As of this writing, he’d just started in his new position, but he did have a good idea of the market.

“Alberta has traditionally been big on oil and gas, which really is the big driver there,” Brad explained. “But we have done a good job working to diversify and be relevant in all end markets.

Brad and his wife, Kendall, have two children: a four-year-old son, Ben, and six-month-old Everett.

Everett’s arrival was a bit unusual, Brad explained, as he and his wife had to deliver him themselves in their home.

“We never made it out of our bedroom. That definitely was not by plan. So that was an experience that was amazing. But we definitely don’t recommend it!” he laughed.

A. I think the opportunities are limitless in this industry. With the electrical industry, you have this mega-industry that a lot of people do not necessarily know about. But really for people coming here, it means lots of opportunities. So putting the work in would be the biggest piece of advice I’d have. You have to put in the work and be humble and that opportunity will find you.

I guess the other thing would be to learn from the people that have been there longer and that really know what they’re doing. I can’t say enough about what I’ve learned from some of our great leadership team in British Columbia and the impact that they’ve had on my career. So seek people out, ask questions and focus on continually developing.

A. The talent pool in our industry is very competitive. Acquiring and retaining this talent is and will continue to be a focus for all of us. Right now, there is a tendency to compete with one another for the same traditional labor pool. In doing this, we are not only limiting ourselves to such a small portion of our population, we are also pushing people further away from our industry and [to be] less interested.

We need to think differently about getting good people in that are using different skill sets. Diversity doesn’t necessarily mean race or ethnicity. It’s people from different markets [such as retail], and people with different backgrounds.

This will promote collaborative thinking in our respective businesses. Who knows what sort of change that could bring in an industry that is evolving rapidly?

So as far as making that happen, I think it’s about getting the word out. I think we need to change our focus on where and how we are looking for talent. We also need to do a better job of making the industry appealing to the younger generation. I think you’re starting to see that with Wesco—thinking outside the box and looking in different places to bring in this new talent.