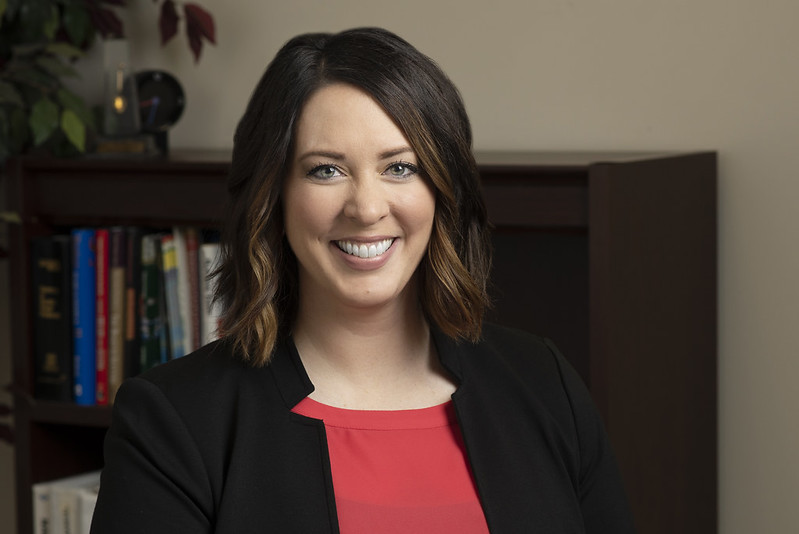 Cassie Bruns was working for Western Extralite in Kansas City when it was acquired by Border States Electric (2014). She and her family had moved there after she graduated from North Dakota State University.

“After college I moved to Texas for my husband’s job and then we ended up in Kansas City,” she explained. “Then a year later, Border States acquired Western Extralite.”

While at Western Extralite, Cassie maintained the website and brand-new mobile app for the company’s salespeople.

“I was a digital marketing specialist which included working on the product catalog as well as managing the website,” Cassie explained. “At the time they were just starting to get into more digital applications. They wanted to launch this app. I took the lead on that as well as doing all the training. And so it was really a lot of fun because it was kind of new and exciting.”

Eventually, Cassie and her family moved to the upper Midwest where she now works out of Border States’ Brooklyn Park, Minn., location. Turned out Border States needed some help with their mobile app too.

“Border States was just starting to launch their apps, and so they asked me to help lead that charge,” Cassie explained. “Their app had some different challenges, but it was still fun introducing that new technology.”

Cassie has been doing more teaching and training at Border States.

“I do a lot of training. It started with the apps and websites and it’s kind of evolved into more system and operations functions,” she said. “I enjoy getting out and meeting people, training them and helping them connect the dots.”

She has expanded her training categories since arriving at Border States, she explained.

“As I got more involved at Border States, I wanted to grow my career. I transitioned more into system training and more warehouse training, sales training,” Cassie explained. “I haven’t done a lot of product training, but I ask a lot of questions. That’s how I learn my products.”

As part of her warehouse training, she took it upon herself to learn how to operate a forklift, earning her certification in 2016.

“One of the roles I took was as an operations coordinator. I’d go out to the branches and make sure they’re operating efficiently and correctly. So we’ll rearrange warehouses, for example,” she explained. “I didn’t want to limit myself only to being able to open the boxes on the shelf. So I asked to be certified on that so I could move a bit with a forklift.”

Being back in Minnesota represents a homecoming of sorts for Cassie as she grew up on a farm in rural Minnesota, she said.

She and her husband, Kyle, have two sons: Max, four years old, and two-year-old Carson. She especially enjoys being able to take her children to the farm on which she grew up.

“Now that we’re closer to friends and family, we enjoy going back up to the farm,” Cassie said. “Any time on the farm and just the ability to get back together with friends is huge, after being away for 10 years.”

A. The best advice I can think of is ask a question. I always ask questions. If I’m on a project and I don’t know the product I’m dealing with, I ask what it is and how it works. That’s how I learn. If I want to grow in other areas, I ask if I can go to a conference. I ask if there are any positions out there that I should be working towards. I’m constantly asking questions. So I think that’s the best bet. You never know. You never know until you ask.

And it’s fun, too, when you find someone is passionate about something so that when you ask a question, their eyes light up and they will tell you more than you even asked. It’s fun learning from someone that’s passionate about what you asked about. I find that to be more useful than training simulations on a computer.

A. I don’t know how well the industry does at attracting people in general, but I think as a woman, I realize you just have to work hard and kind of let your work speak for itself. So as far as the industry attracting them, I know that’s tough. I think the Women in Industry Conference helps bring to life that there are more females within the industries than people realize and being able to connect to them was great.

It kind of gives you that little confidence that, you know, I’m not the only one out here going through this. OK, we got this.

Border States has been doing a good job at getting their name out there. Being employee-owned, there are a lot of different benefits that attract people. And being nationwide helps tremendously, too.

Tagged with 2019, 30 under 35, Border States
Joe Nowlan  is a Boston-based freelance writer/editor and author. He can be reached at jcnowlan@msn.com.