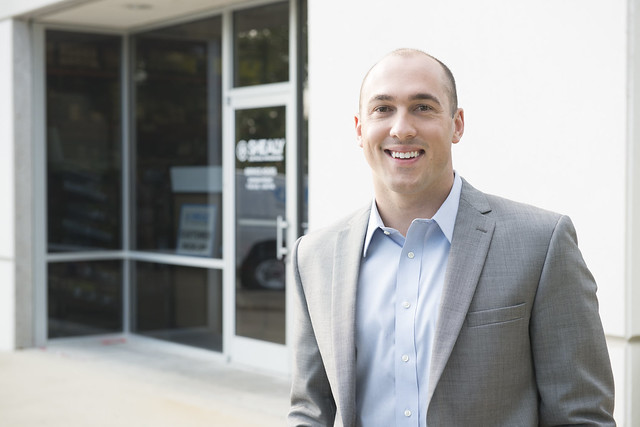 Mac Doyle was about to graduate from Wofford College, in Spartanburg, S.C. in 2012 with a degree in finance and economics. While his education gave him great preparation for the business world, he had another goal in mind.

“I played baseball in college and had a pretty successful career. I was hoping to be selected in the draft by a professional team in June of 2012. After three tense days, my name wasn’t called and I realized I didn’t have a game plan going forward,” Mac explained.

The father of his college roommate worked at Shealy Electrical and offered to help.

“He put me in touch with Jack Smith [director of talent management] who was looking for the third and final candidate for his distribution management program that he was developing,” Mac said.

It turned out to be fortuitous timing as Smith and Shealy Electrical were inaugurating its T2 Distribution Trainee program. Mac joined with two other new hires in its first year.

“We joked that we were the guinea pigs of the program. We were learning the industry while also laying the foundation for the program for years to come,” Mac said.

Mac started as a trainee in the Shealy warehouse in Charlotte, N.C. He learned quickly, although there was the occasional hiccup.

“When I first started, somebody asked me to grab lamps off the shelf. I was looking for what was sitting on my bedside table,” he laughed. “I wasn’t sure if we sold those or not. Charlotte, the office I started in, is still one of our biggest offices in the Southeast, with nearly 80,000-square-feet of warehouse to maneuver through.”

Shealy was acquired by Border States Electric in 2016 and they are known today as Shealy Electrical, a division of Border States.

Mac worked his way steadily up the ladder and, in November 2017, was named the area branch manager for the Charleston region, made up of two offices.

“We have a unique customer base. Though most of our business comes from commercial and industrial contractors, we also serve residential contractors, OEMs, and international contractors working around the world,” he said.

When Mac mentions his baseball career at Wofford, he isn’t just living past glory days. In fact, he was recently inducted into Wofford’s Athletic Hall of Fame. He graduated with the school record for most career hits. And one other record, too.

“I’m not a fan of talking about myself because baseball, like business, is a team sport. But I’m the career leader there in many categories. I hold the career hits record but also the strike record as well,” he laughed.

He spends most of his time with his two girls: His girlfriend, Dani, and his English Labrador retriever named Callaway.

“We love to travel. We usually plan trips throughout the year to visit new places. The goal for 2018 is to incorporate healthy activities into the mix. We’ve committed to trying a destination marathon,” Mac said. “We pick a cool city we want to visit and schedule the trip around a local marathon. It hasn’t happened yet but that’s on the agenda.”

A. My advice to anyone would be find a way to better yourself each day no matter how big or little that improvement is. I know that may seem simple, but simplicity makes things obtainable. I think that’s a big reason why I’m where I’m at today. Each day I try to focus on something to get better at. I make sure I go home every day having learned something new. Never take a day off from improvement.

A. Nothing has been more rewarding to me so far than to be involved in a project and to see it through completion. So much goes on behind the scenes during planning and construction. Coming from a sales background in my prior role, when I would work on a project—let’s say a school, for example—it was really rewarding recalling all the headaches and heartaches that we went through to get a project completed as planned and on time.

Unfortunately, most individuals who assist on these projects day in and day out never get to experience that result. We have employees sitting behind a desk for 40 hours plus a week, ordering, moving and tracking material for projects. I’d challenge anyone in a sales role to make sure they get those employees out to see the results of their hard work and share with them that rewarding aspect of what we do.

Mac is very dedicated to his position with BSE and does an excellent job for his company. Congratulations Mac!