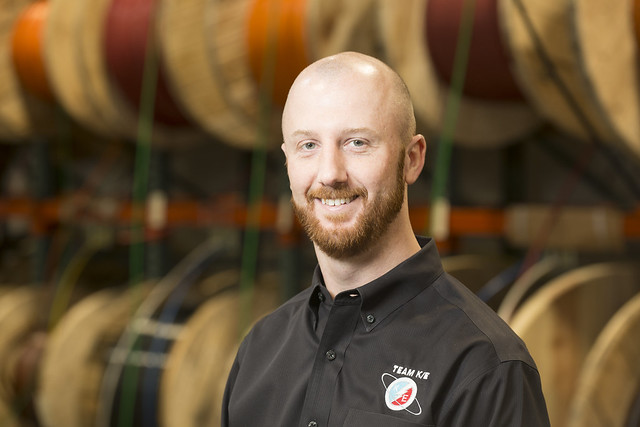 While K/E Electric is his family’s business, Rhandi Kuchenmeister didn’t necessarily gravitate towards it as a career, at least not while growing up, and not immediately after graduating from Central Michigan University.

“I had worked here throughout my teens, on and off through school and a little bit in college,” Rhandi said. “I kind of fell away from the business and didn’t really think about it until I graduated college.”

When he graduated college in the mid-2000s the economy in general—and the Detroit-area job market—was struggling.

“Looking around here in Detroit with the huge automakers, I had an engineering degree so I was looking in that sector,” Rhandi explained. “But there wasn’t much available.”

So he started working at K/E in 2006, but not as a permanent move, he admits.

“I had originally started at K/E with the idea that it was going to be temporary even though it was the family business. And I just stuck around—and it has been 11 years now,” he laughed.

Rhandi, like so many before him, started out in the warehouse. It had been about four years since he had worked part-time at K/E but he soon found that wasn’t of much help in a full-time position.

The learning curve was steep and fast.

“I didn’t necessarily know what I was grabbing off of the shelves,” he said. “Then after a couple of months of working full-time in the warehouse, they put me on counter sales. Then I realized that I actually had to know what’s in this box and what it does and what it doesn’t do. I had to know how to sell it and figure out the technical specs of it and things like that.”

Today, Rhandi is a purchasing agent at K/E. He was born and raised in the Metro Detroit area.

“I live 20 miles north of Detroit and pretty much my whole family lives within a half hour of me,” he said. “Everyone involved in the business are all Detroit Proud.”

Single, Rhandi and his family are avid motorcyclists.

“The whole family has motorcycles. My dad had one for a couple of years before us. But my two brothers and I got the same motorcycles [Harleys] but in different colors about seven years ago. We try to ride as much as we can but sometimes family and life get in the way of fun,” he laughed.

He also enjoys going to concerts. The night before this interview he attended Bob Dylan’s show in Detroit.

“It is definitely what I do with most of my spare time. Last year, I went to 84 concerts, I think it was. So that’s more than one a week which is a bit tiring,” he laughed. “Tomorrow night I’m going to see Guns & Roses.”

A. If you are just starting out my advice is to learn everything you can. I tell some of our new employees who are just starting out to assume everything matters until you know that it doesn’t. When you’re looking at certain things when starting out, it might not matter to you but it will matter to the customer. The dimensions of a safety switch or the amperage or wattage of this or that item, for example. Assume everything matters and ask questions. There are no dumb questions. I would rather somebody asked me 10 questions than to have one problem. Educate yourself and don’t give up.

It might take you longer than some or you might be quicker picking up certain things than others. We have some people, for example, who can do a power takeoff in a matter of minutes but then they will not know anything about lighting and vice versa. So there is definitely the ability to be very specialized in a field.

A. Probably just getting the awareness out there that the electrical distribution channel exists and that we matter in the global spectrum of things. We are a big portion of what goes on; not a lot of people know that. We are involved in every construction process, every renovation process. And some people just look at a building and see bricks but most of us go in there and we are looking at light bulbs and what type of fixtures they have and the plugs they put in. It’s kind of funny, after working in the industry for even just a couple of months, I found myself going to bars and restaurants and looking up and around, asking myself, “Why did they install this like that? Why didn’t they use such and such in this application?”

Tagged with 30 under 35
Joe Nowlan  is a Boston-based freelance writer/editor and author. He can be reached at jcnowlan@msn.com.