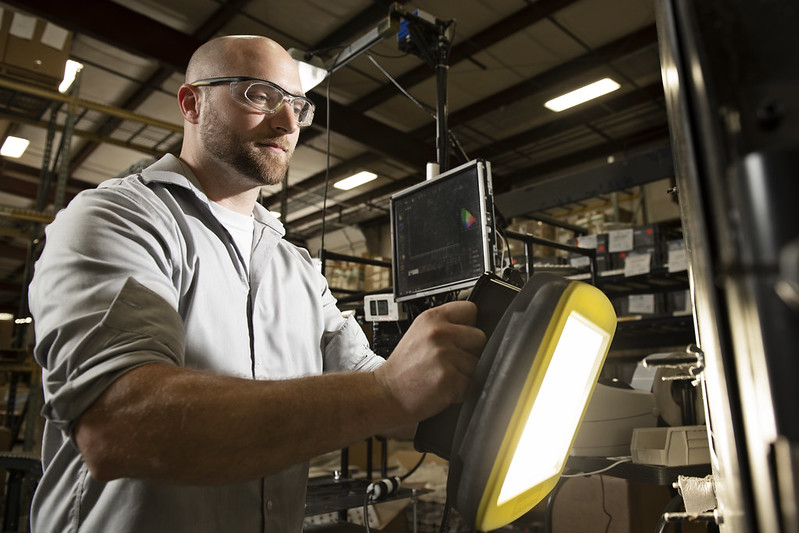 You could say that the electrical industry has been a part of Jeff Pigg’s world for virtually all his life.

“I pretty much grew up in the electric industry. My dad runs a construction cable company where they install telephone poles around North Carolina,” he said. “So I learned a lot from him growing up.”

As a kid, Jeff always liked tinkering with things, taking them apart.

“I remember as a kid building and assembling some of the cable parts from his maps in the living room. That was really cool growing up,” he explained. “I’ve always had kind of that engineer mindset and love seeing how things work and really love fixing them when they don’t.”

“I really jumped on board in a hurry. I started back as an associate, worked on production lines,” he said.

Jeff has taken full advantage of his second stint at Shat-R-Shield and has worked his way steadily up the ladder. In August 2018, he was named vice-president of operations.

“I was the director of manufacturing and it’s essentially the same role. So it was not a big change for me when I took the VP role as I had similar responsibilities,” he explained. “But it gave me an opportunity to take on more presence with our senior leadership.”

Jeff now sits on the senior leadership team at Shat-R-Shield.

“We meet weekly and then do offsite meetings as well. We’re really just focused on the strategy and direction of the company, how we’re going to go to market on certain more high-level long-term initiatives,” he explained. “We’ll focus on a lot of ideas and concepts and things of that nature. We pull back from the day-to-day grind sometimes and look at the bigger picture.”

Obviously, working with lighting, the learning never lets up for Jeff. He has earned his black belt in Six Sigma.

“I always say never stop learning,” he said. “When I came to Shat-R-Shield and learned about the Six Sigma methodology, I was extremely interested in it.”

Jeff and his wife, Megan, enjoy the outdoors in North Carolina.

“We’re really good about just enjoying our time together, no matter where we end up or what we end up doing,” he said. “We just really make an adventure out of it. “

Jeff is also a passionate collector, and fixer-upper, of old cars, motorcycles and, recently, tractors.

“I’m a very enthusiastic person when it comes to mechanics and I’ve got project cars and project motorcycles,” he said. “And, yes, I picked up a 1960 tractor, which is the first time I’ve picked up a tractor. I think it’s just the coolest thing, how these things were designed. So I intend to restore it.”

A. There are four things that hold pretty true: stay focused, be humble, never stop learning, and make the heroic recovery. Those are things that I always preach around here. You set your goals and you reach them. So keep it simple. Treat everyone with the same level of respect you treat the owner or the president.

My real favorite is making the heroic recovery. I wish I could claim that term. Years ago I had a plant tour with a company in North Carolina and the manager there said it to me. And it’s just stuck with me. What I mean by that is mistakes will happen. You make all the efforts to make the customer happy, no matter what. So you fix the situation, you make the heroic recovery to make the customer happy. And that has just really stuck with me.

A. There’s a lot going on in total. For us, specifically, lighting has changed so much, even in the 10, 11 years that I’ve been involved in it. To me, it’s great being a part of a company like Shat-R-Shield that’s part of a big changing market with such a strong group and a strong presence in the industry. We’re able to essentially introduce ourselves to a new market with the LED technology, have unique products and be competitive. It does keep me energetic and it does keep me interested because so much changes and as long as we’re staying on the forefront of that, we can be a big part of it. And that’s what keeps me enthusiastic because there are a lot of opportunities.

Tagged with 2019 30 Under 35, 30 under 35, Shat-R-Shield
Joe Nowlan  is a Boston-based freelance writer/editor and author. He can be reached at jcnowlan@msn.com.