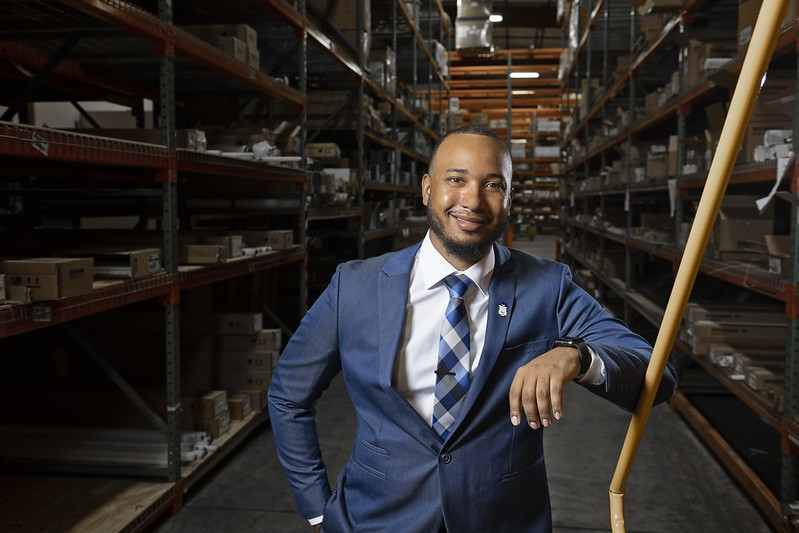 Naim Shamsid-Deen laughingly describes his path to the electrical industry as “kind of a weird one.”

He graduated from Arizona State University with a degree in biology. At one point, Naim was thinking of going to medical school before deciding to enter the mortgage field where he worked for five years.

“I was pretty good at what I did, but I didn’t really enjoy it all that much and didn’t see myself doing it for the rest of my career,” he said.

A friend from college was the El Paso branch manager for Border States. He told Naim about his company’s distribution leadership program (DLP).

“He went through the program and said it was a good industry and it was something worth looking at,” Naim explained. “Once I came in and saw the operation of Border States and met with some of the management, I thought it would be a really good fit for me.”

Naim entered the DLP knowing full well that he’d have a great deal to learn. He admits, though, that after having graduated college and then gone on to work successfully in a different field, to then work in a warehouse as he did initially was a challenge to some extent.

“The first six or seven months of it was all working in the warehouse,” Naim said. “That was a very sobering experience for me. There were definitely times where I thought, ‘Did I do the right thing?’”

That quickly faded as his knowledge grew and he began to enjoy the work as well as his co-workers at Border States.

“I think it became a lot easier for me once I looked at everything in the mindset of how does the work that goes on in this warehouse affect everything else? And that’s where it clicked for me,” he explained.

Naim was based out of Border’s Phoenix branch while in the DLP. But they’d send him to other branches as needed—Bismarck, N.D., Salt Lake City and St. George Utah, among others. He’s appreciative to this day of his co-workers being anxious to help him.

“All the people that I have worked with are awesome. They were always there to help me whenever I needed it,” he explained. “I went to quite a few branches within Border States. Everybody was very invested and willing to help me be successful.”

“I definitely have a much larger scope of responsibilities and duties,” he said. “I still oversee the project and quotations team, but now I also oversee our warehouse as well as being in charge of inventory and many other day to day functions.”

In his free time, Naim and his girlfriend explore various restaurants in Albuquerque. In addition, he enjoys playing the drums.

“When I got out here, I bought an electronic drum kit—probably better for apartment living anyway,” he laughed, adding that by playing them through headphones, it’s easier on his neighbors.

A. Don’t be afraid of not knowing. And place your stock early in making the right relationships.

I’ll never tell anyone that I know everything, but what I will tell them is that I always know who to go to in order to find the answer.

You should make sure you have a relationship with those people so that you’re never in a position where you don’t know an answer or where to go to get one. The best part of this process is that after some time you’ll find that you become that knowledgeable person for others that your peers were for you.

A. It’s going to take us going out and being present in spaces where the talent is. Before someone told me about this industry two years ago, I had no idea it existed. I had never heard of it. But once you get into it, it’s a huge industry and there’s a lot of opportunity and a lot of need for talented individuals.

I think it’s going to take us being visible to those people. We’ve gotten some traction going to different career fairs. When I was in Phoenix, we went to career fairs all the time at Arizona State University to get our name out there. And people had never heard of us or electrical distribution in general. They just recognized supply chain and that sparked their interest.

Tagged with 2019 30 Under 35, 30 under 35, Border States, people
Joe Nowlan  is a Boston-based freelance writer/editor and author. He can be reached at jcnowlan@msn.com.