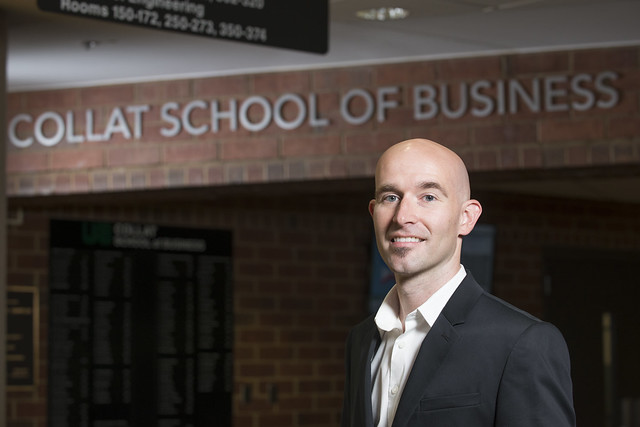 Dave Karr had his eye on the electrical industry while still in college earning his degree in industrial distribution from the University of Alabama-Birmingham. After graduation he worked for General Electric.

“I started with a co-op internship at GE when I was at Alabama-Birmingham almost a year and a half before I graduated. I knew the GE had a leadership development program that I was interested in. And it built from there,” he explained.

While in that internship, though, Dave was developing relationships with Mayer Electric, his current employer.

“They were GE’s biggest customer in Birmingham when I was in that co-op program,” he said.

After graduation, Dave joined GE’s commercial leadership program.   Upon completion, he worked in various cities including Chicago, Atlanta and at GE’s headquarters, then in Connecticut. While moving up the ladder at GE, Dave often worked with Mayer Electric.

Among his titles was region channel manager (working closely with Mayer), and national account manager for Mayer, where they were his primary focus. Dave was also the region executive for the South where Mayer Electric was the largest distributor in his region.

He essentially switched teams—going from a manufacturer to a distributor.

“You’re looking at the same industry but through a different lens. The thing that I’ve enjoyed is getting closer to customers and having more connectivity to all of the suppliers that we represent,” Dave explained. “I feel like Mayer has really empowered me and some other younger leaders in our business to take on some responsibility, take some risks to do some things differently in the company and sort of change the culture.”

Dave has nothing but good things to say about his time at GE but feels that the change to Mayer has been a good one for him.

“I left GE on good terms and still think the world of them. But it was very apparent to me that Mayer Electric represented an opportunity where I could more directly apply my skill set and be able to see a much longer-term runway with this company. There is a lot more ability to move internally especially within the senior leadership rankings.”

In August, Dave was named director of marketing.

“I want to bring us into the 21st century in how we align our touch-points with our customers, not just marketing in the sense of how we create flyers,” he explained. So we started to use things like podcasting and in-house video production to be able to create marketing materials and educational materials for our customers and our internal teams.”

Dave and his wife Tiffany have a 3 year-old daughter named Corina.

In his spare time, Dave is an accomplished musician. He’ll be playing guitar on a local artist’s upcoming studio album, he explained.

“I’ve been a musician for my entire life,” he said. “I’ve been getting back into that and still have a lot of connections in the Birmingham music scene.”

A. Take risks. I would also say to anybody coming into this industry right now that there is such a prime opportunity for disruption and for innovation. Think innovatively and take risks. If I look at every single move I have made in my career, there was an extreme element of risk. In every decision I made. But you have to weigh that out and again you have to be willing to accept failure. And you have to move quickly. So I would say be innovative, think big, take risks and be willing to accept mistakes. Educated risks, of course. Don’t be reckless. But right now this industry is so stodgy that we need breaths of fresh air and new thinking. It is right for that.

A. One thing I’ve always loved about this business is that it is still a people business. That’s what help separates us from folks like Amazon.com. We are real people and real faces that make real connections with our customers. I have many customers that have become best friends with me. And I think when you work in an industry like ours—and you are so deeply connected with people to help them develop solutions and being involved in supporting them to the solutions—some of these projects we work on, people pour more of their time and life into that than they do their families. So when you are connected with people in that way you become passionate about it. I’m passionate about my coworkers. I feel that those people are like my family. That’s what keeps me going. It’s the people.