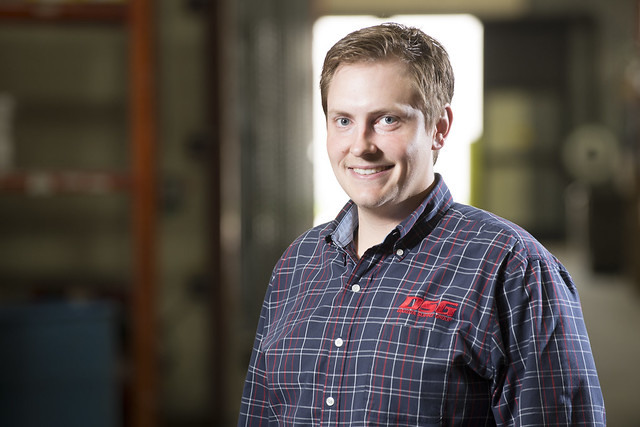 To say the least, Jase Rosendahl got an early introduction to electrical distribution.

His father worked at the Dakota Supply Group, he explained. In fact, young Jase even received some very early on-the-job training as he got to tag along occasionally on his dad’s sales calls.

“Every once in a while I got to skip a day of school and I would travel with him on the sales routes. So I knew at a young age that it was a fun industry,” Jase explained. “I also saw the relationships and friendships that he had with customers who became lifelong friends. As soon as I was old enough to start thinking about a business, I knew that was the industry I wanted to be involved in.”

By the way, his father went on to work for 43 years at Dakota Supply and retired at the end of 2017.

Jase would go on to graduate from the University of North Dakota with a degree in business administration. That same year (2010) he started in the Dakota Supply warehouse. While he had a bit of an introduction to the business from his childhood, Jase’s eyes were opened once he became a full-time employee, he explained.

“It taught me a new perspective of customer service. So often I would look at customer service as just a point of contact on the phone or in person,” Jase said. “But we had a really strong leadership team in the warehouse that taught us the importance of proper product handling, packaging things and really taught us to ask ourselves that if we were the customer, how we would want something boxed or packaged. Make it look professional and take the extra time to make it up to our standards as we are all employee-owners here.”

After the warehouse, Jase eventually moved to different Dakota Supply locations and worked on its city desk followed by a promotion to inside sales. After that, he moved on to outside sales.

In 2014, Dakota Supply purchased the Woodruff Company, a distributor of plumbing and heating products with locations at Rochester, Austin, and Winona, Minn. Many of those product lines were absorbed by Dakota Supply.

In April 2016, Jase was named branch manager at those three locations in Rochester, Austin, and Winona.

“Now I cover plumbing, heating and electrical in the Rochester branch,” he explained, “and the satellite stores in Winona and Austin.”

Based in Minnesota, he is more than familiar with brutal winters. But he can joke about it.

“We don’t have any snow in southern Minnesota yet [early December]. We’re in the tropical part of the state,” he laughed.

In the past, Jase coached area kids in hockey and baseball.

“One of my first jobs in high school was coaching youth baseball and youth hockey,” he said. “I haven’t been as involved in hockey the last few years, but I still skate once or twice a week in a men’s league here.

Jase is single but recently got engaged. He and his fiancé Amber plan to marry in 2018.

I would say to keep your eyes and ears open and don’t be scared to press for change. Change can be a scary thing but nothing good comes from staying the same. You have to really expand your horizons, step outside your comfort zone and be open to asking the tough questions, but also provide ideas and solutions.

I encourage my own team here to ask questions whether it is about a new initiative or something I might have schemed up. I will lay it out to them and I am constantly encouraging them to ask me questions. If people are not asking questions, that usually tells me that it was poorly relayed to them on my part or I didn’t clarify specifics. So then I might talk to individual team members and ask for their feedback and understanding of it. If nobody has any questions then, to me, that is a bigger picture thing that falls on me for not explaining it well enough. And if it’s something they may not agree with, I want to learn from their perspective and what they might have in mind for me.

It wasn’t that long ago that you were a “new kid” in the industry. What similarities—and what differences—do you see in the “new kids” who are just now joining the electrical industry in your company?

I think it goes beyond just the electrical industry. I always say that every generation has its pros and its cons but none of us individually is going to change a generation. So rather than trying to change a baby boomer or a millennial and how they think and how they operate, I try to adapt to them and plan for the future. Millennials might look for fun stuff at the office and different schedules and flexibility—I just try to treat everybody individually and, as much as we can, we’ll try to cater to each individual and what drives them and motivates them.