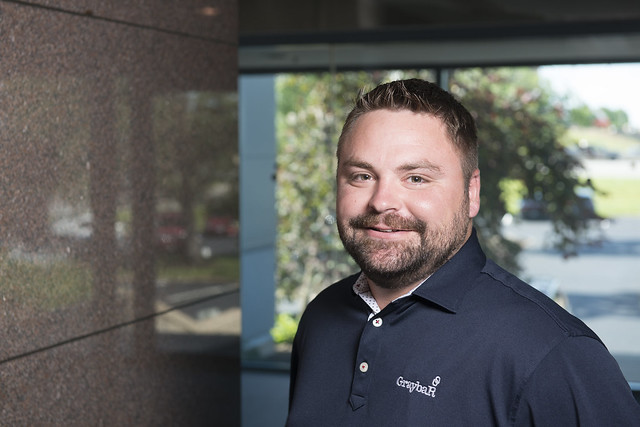 Jason Peters was finishing college when he first thought seriously about a career in the electrical industry because he was looking for a career rather than a job.

“There were a lot of milestones all happening at once. I was finishing school, my daughter was born and a couple of weeks after that I started at Graybar,” Jason said.

His first Graybar position was as a customer service rep—and he had some pretty interesting customers.

“I did a lot of work at military bases on both coasts as well as directly with some bases in Afghanistan,” Jason said, while explaining that he himself did not travel to those bases. “You feel like you have a larger obligation to get things done for those folks in the military. The tasks were sometimes difficult but it was always rewarding knowing that I was doing something to help our country.”

He eventually moved on to other Graybar positions including a project specialist and later as a continuous improvement leader.

His current title is manager of corporate services in the strategic accounts organization. He oversees two different teams, he explained—a national customer service team and a national project management team. On those two teams, he has about 20 people who report to him.

“The customer service team handles some of our largest centralized accounts and is responsible for servicing our Graybar.com customers. We also have extended-hours customer service,” he said. “When a branch closes on the east coast, their phone calls are forwarded to our centralized team. And that goes until 10 o’clock.”

His other group, the national project management team, “focuses on large projects. For example, it could be a retail customer that that has 100 sites and are going to renovate their lighting. The team leverages our network of locations to help provide the most seamless experience possible for those customers.”

Working primarily in the lighting end of things, Jason’s customer base is wide-ranging.

“One of our largest projects was Martinsville Speedway. We put the lighting in for that site. We also do quite a bit of work with other large retailers and financial institutions. We have another large fiber project with the Commonwealth of Kentucky,” he explained.

Jason lives with his wife Mandy and their 9-year-old daughter, Brecklyn.  He enjoys golf and hunting, sometimes accompanied by his daughter.

“She is impatient [when hunting]. And she’s the same way on the golf course too,” he laughed. “She’s a little bit too young to stay focused, but it’s nice spending time with her. It’s not as much about the hunting as it is to be able to break away from technology and spending some quality time together.”

Jason also devotes time to charitable work. He is involved with the Loyal Order of the Squirrels, a charitable organization that provides support for the elderly, handicapped and children of the St. Charles County area of Missouri.

“I try to donate as much of my time as I possibly can. I think it is very important to give back to the community,” he said.

A. A lot! [Laughing] The most important thing is to work hard. I think as long as you work hard and you are always searching for opportunities to grow—it will make a difference. We are a mature industry so it is important to keep an open mind as you grow. It’s not always easy to do that, but if you stick with it and you work hard, that experience will really pay off.

Q. What motivational approach/tactic has been most effective for you in your career? That is, effective both for you individually and, if applicable, for those employees whom you manage?

A. I like a challenge.  So I usually volunteer for the high-profile tasks. I feel like, the bigger the task you put in front of me, then the more you’re going to get out of me. Overcoming those challenges motivates me to grow in my career.

I try to take the same approach with my teams in the hope that they get the same satisfaction out of realizing their full potential. I try to set up a broader goal for my team and allow them to work towards the goal in their own way, instead of me micromanaging them. When we complete a project, I feel my team members display a similar satisfaction because they invested a lot of their own ideas into the solution.