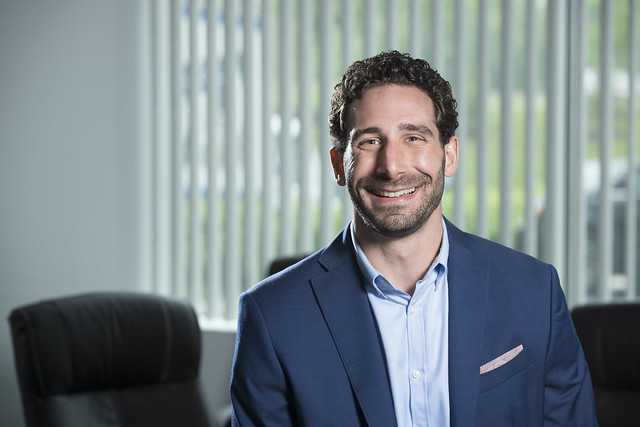 Michael Venditto was set to graduate from Villanova University in 2010 unsure of a career path but determined, as he said, “to go and work in France. I studied abroad in college and I wanted to be challenged to learn the language and the culture a little more than I had.”

As luck or fate would have it, Rexel was recruiting for its Distribution and Services Leadership Program (DSLP) and was planning to send a candidate to work in France.

“They thought I would be a good fit for this program,” Michael explained. “I then interviewed with someone in France, in French. I spent about 2½ months just prepping for that interview. After that went forward, I had another interview a couple of months later with the local French subsidiary and they signed off on it.”

His degree from Villanova was in history with a philosophy and French minor, he explained. Not the typical business-related degree.

“That actually came up in the interview,” Michael said. “They would say, ‘What can you do for us? You are not a technician or an engineer.’ And I said, ‘I know people.’ That’s how I sold myself to them in the sales position. People, communication and taking big ideas and trying to make them practical.”

Before heading to Paris, Michael went through an eight-month training in the United States.

“The joke I say now is that I lost projects every possible way. I had the opportunity to make mistakes and learn what not to do,” he said. “That really helped. Even now, those initial experiences inform the pitfalls I should avoid. Failing and struggling in my first few months was perhaps the best way to learn the business.”

Anyone’s first weeks in the electrical industry can be hectic and head-spinning. Michael’s was no exception, he explained.

“If you took someone who couldn’t swim and you threw them into water, they are probably not going to swim right away—they’re going to be treading water for a while. It was like that,” he said. “I would say I was spitting up water for the first couple of months while figuring it out.”

But figure it out he did. French or English, there was a great deal of common language that helped.

“In a lot of ways the business is really universal in that it is local and relationship based,” Michael said. “Much of the French I knew really didn’t matter because I had to learn the slang and local references. It was a little bit overwhelming but every day I would learn ten new things that I didn’t know the day before. It was really enriching and exciting.”

Michael returned to the United States in 2013. His current title is the energy solutions manager of the mid-Atlantic region.

“In a nutshell I’m responsible for driving and growing our energy solutions business through our existing branch and sales network, from Pennsylvania through North Carolina,” he said.

Michael and his wife, Kristel, (whom he met in France), live in Washington D.C. When he has some spare time, he has taken up the martial art practice of jiu jitsu.

A. Skills and experience. You should always look to develop new skills and gain new experiences. Whatever your position, you should also learn how your role interacts with the other people within your company and partners in the market, understanding their goals and responsibilities. Broaden your range of experiences and skills to know best how you can help your colleagues, market partners and customers fulfill their responsibilities and achieve their goals.

A. There is a lot of energy sales opportunities that can sometimes pose a problem. Being efficient with our time and choosing the most appropriate projects to pursue is the most consistent and formidable challenge. We must manage short, medium and long term development plans, all at the same time. For anyone on our team, it is very easy to get pulled into multiple opportunities in a single day without ever asking if this is the best use of our time. It’s a challenge to remain disciplined going after the most appropriate opportunities, knowing which to pursue and which to pass up.