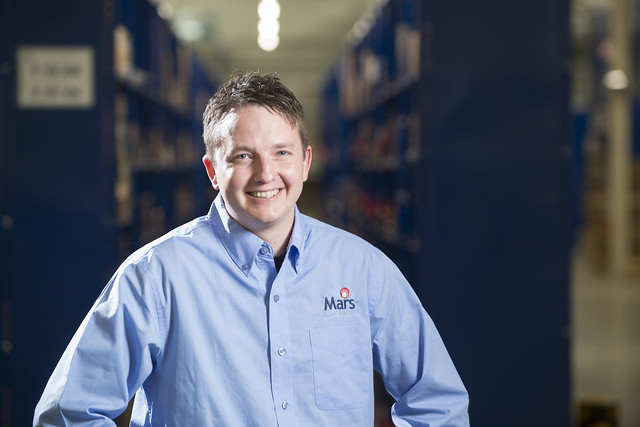 Chris Osborne knew of Mars Electric Supply from a childhood memory. His parents were members of an Elks Club in Ohio located near a Mars Electric location.

“Where our old warehouse was in Willoughby, Ohio, right next door is an Elks Club and my parents used to go there,” Chris said. “I remember as a kid how small it was and later, over time, how much it had grown.”

Before going to work at Mars, though, Chris worked for eight years at Community Surgical Supply.

“It was home medical and home oxygen equipment, dealing with liquid oxygen. I started as a driver and did that for a year. Then they moved me to a distribution supervisor,” he said. “Eventually I was managing the warehouse and also managing drivers, doing the routing, logistics, the loading and stuff like that.”

Chris enjoyed the work and the challenges of getting the company’s delivery logistics in order. But over time, he began to look for something more.

“After eight years I felt it was time for a change and take the next challenge,” he said. “I started to glance around and see what was out there.”

He saw that Mars Electric had placed an ad looking for someone with his background.

“Mars Electric didn’t have anyone with logistics experience so when they put the ad out there, I glanced at it and applied,” Chris explained. “And about a week later I got a phone call from them.”

While his background and experience were helpful in making the adjustment to Mars Electric, Chris soon realized that there were a number of changes he had to get accustomed to.

“I was going from maybe 5,000 items to here where we had maybe 11,000 items,” he explained. “My first two weeks here I don’t want to say things were overwhelming. But everything was new. They didn’t have this position here until I started. There was no actual logistics department. So my biggest thing was making the routes more efficient and making customers happier by getting to them quicker.”

Drivers’ main concerns are getting products to customers on time, if not sooner. But new drivers at Mars spend the first two weeks working in the warehouse.

“That way they can learn what we do in the warehouse. I don’t expect them to learn all the products but they can see some of it,” Chris said. “Then I start putting them with each driver to see the different routes. And we go from there until we feel comfortable and they can go on their own.”

He is a single father of two children, a 13-year-old daughter, Maddie, and 11-year-old son, Christopher. Raising them, of course, takes up much of his time as well as rooting for the Cleveland Indians.

“I’ll go to sporting events. I love baseball. That’s my favorite sport. I go to see the Indians play six to eight times each season,” he said. “And spending time with the family. I do enjoy camping with them here and there. And my daughter plays basketball and my son plays basketball and baseball. So they keep me busy with their activities.”

Be patient. Communicate. Communication is what I learned even at my previous job. Communication, especially if someone you’re talking to is 50 years-old. When I came in here, I was 30 or 31. Some wanted to look at me and say, “Who is this young kid?”

Also, I would say to have a plan. In between my previous position and starting here, I had two weeks off. I would email my soon-to-be boss even though I technically hadn’t started yet. He’d give me a list of everything he wanted to change and incorporate. So I had developed a three-page plan and when I started I stuck to it.

So communication and patience are the biggest things. You can’t come in here and just expect to change all of a sudden. You would make people mad and upset and they don’t want to work with you.

I like being here. I like doing this and the challenge of being with a different company with different products. It was kind of nice to go from a corporate to a family-owned company. That was a difference. And the way we are growing and taking off, it is a good time to be here. My position is something I always wanted to do.

I want to do more but you have to be patient and sit back and soak up as much information as you can. Now I have learned how to cut wire. I’m not a professional but I now know about it. And working with the other departments to see what they are going through. We all sit down and see how we can make things better and more efficient.