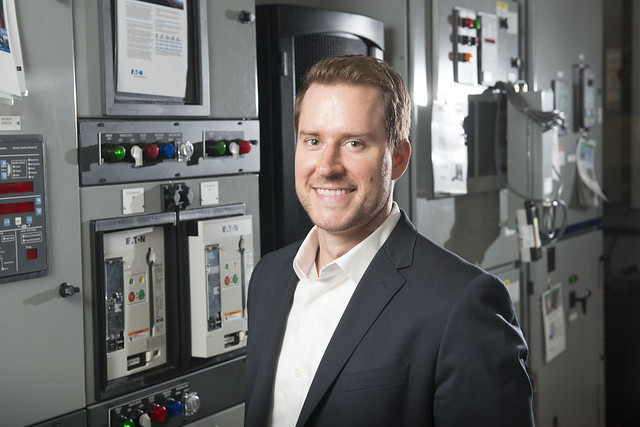 Growing up in southeast Michigan, Ryan Flynn planned to study engineering in college (Michigan State) and after graduation apply for a job in the automotive industry.

In fact, Ryan had done a few internships for what was then Daimler-Chrysler and enjoyed the overall experience.

“I just got the sense that the automotive industry was in for some rough days ahead, just from my experiences through those internships,” he said. “So I was looking for an opportunity outside of automotive and was open to relocating.”

Michigan State did a lot of recruiting with companies, Ryan explained, and Eaton was on campus interviewing candidates. The company made an immediately favorable impression on him.

“Eaton was recognized as among the most ethical companies to work for which was emphasized during the interview process. I took a liking to that,” Ryan explained. “The company seemed to have a culture that permeated from the top down. I was seeking that at the time. The other thing was that Eaton positioned themselves as a growing company. Everyone I spoke with said that this company is on the move. They were looking for movers and shakers, people willing to relocate and who were interested in developing their careers.”

Both company and job applicant hit it off.

“I think ultimately they were looking for people with strong learning agility, people who had demonstrated leadership capabilities and people who are just genuinely motivated to learn and to grow,” Ryan said.

He started in the Eaton leadership development program—and got around quite a bit, to say the least.

Throughout his career, Ryan worked in Latin America, Europe, Asia, and Puerto Rico where Eaton was in the process of closing one of its branches and moving it to the Dominican Republic.

“I was in Puerto Rico for about six months. I was basically an assistant program manager helping to execute that transition,” he explained. “I spent a lot of time with those teams moving product lines from Puerto Rico to the Dominican Republic and it was a tremendous learning opportunity.”

After moving back to the United States and taking on several other roles, he eventually made his way to Chicago as an area sales manager.

“We have responsibility for the Chicago market. That is everything from Northwest Indiana up to the Wisconsin border,” Ryan said. “I’m responsible for two sales teams. One focuses on the commercial construction market and the other on industrial end-users. So no one day is the same, which is something I love about my job.”

Despite his busy schedule, Ryan has found time to pursue his MBA from DePaul’s Kellstadt Graduate School of Business. He expects to receive that degree this summer.

“I tell the younger folks on my sales team that you just can’t stop learning in this industry and there is no shortage of opportunities,” he explained.

Ryan and his wife, Katie, live in Chicago.

“My wife and I make work-life balance a priority and we very much enjoy traveling. This Fall we are going to Greece and Switzerland to visit some friends there and celebrate the completion of grad school,” Ryan said.

A. Always have the desire for personal development, growth and continuous learning. Always be pushing yourself to get better. I often tell people on my team that if you think you have plateaued in terms of growth and there is nothing new you can do, then it’s probably time to consider moving on. There will always be new trends, challenges, and disruptive technologies so it’s important to stay current while learning from the past. By finding new ways to engage in your business and with your customers, you will continue to grow in the industry.

So I think the take away is to never assume there is an established path. Or just simply be aware that you don’t know what you don’t know. Have an open mind, be engaged in your work and put yourself in a position to succeed. With a little hard work, some luck, and good timing you never know where your career may take you.

Tagged with 2017, 30 under 35, Eaton
Joe Nowlan  is a Boston-based freelance writer/editor and author. He can be reached at jcnowlan@msn.com.