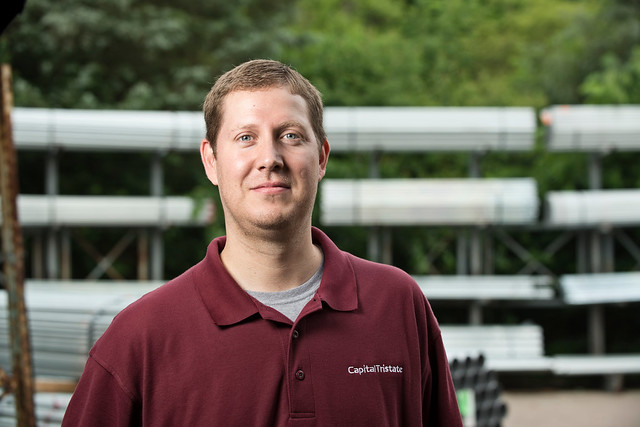 While Greg Drumheller’s father has been in the electrical industry for 40-some years, Greg himself took a bit of a circuitous route before joining CapitalTristate.

After graduation from Radford University in Virginia, Greg was in charge of supplies at a company that sold printers, fax machines, and related equipment.

“It probably should have been like a one-year position but I stayed with it a little bit longer than they originally planned,” Greg explained. “I think I was there for about three years.”

He then moved to Charlotte, N.C., where he worked with a friend in a property management company. Not fulfilled by the work, Greg moved back home to Richmond. However, as luck would have it, CapitalTristate was just starting a new training program, he said.

“One of my father’s buddies asked him if I would be interested in this,” Greg said, having little idea of how it would work out if he enrolled. “I didn’t realize I would be in it forever, but I am glad that I did.”

“I think I did that for six to eight months. Then they moved me to counter sales and I did that in three different locations, each having different clientele,” he explained. “I did that for about two years. And I’ve been on inside sales for about four years now.”

Greg found himself responding to the daily challenges, especially the constant learning. A mentor gave him some good advice.

“When I first started there were so many different items to learn and it was very overwhelming,” he said. “One of the guys at the counter told me that if I could just learn one new thing a day, I’d do very well in this business because a lot of people, he told me, don’t try to expand their knowledge.”

It is advice he has taken to heart.

“I try to make it a point to each day try to learn something. And when you get used to doing that, it just comes natural to you,” Greg explained. “It might sound silly to just learn one thing but over the course of the year you’ve picked up a lot of knowledge.”

He estimates that 80% of his current customer base is for commercial construction with the remaining 20% focusing on residential.

Greg describes himself as a “random sports fan,” but cheers for all the Cleveland professional teams.

“I have been a Browns, Indians, and Cavaliers fan since I was a young child,” he said. “And I cheer for Ohio State in college sports.”

He and his wife, Jenna, recently moved to Roanoke, Va., where they live with their son Max, who turns two in December.

Greg used to play in area basketball and softball leagues but, as you might imagine, his young son takes up most free time now.

“Nowadays with the young child, working and owning a house—that’s where most of my time is spent,” Greg said. “Max is definitely a full-time job, keeping up with him. And that’s a job I don’t mind doing at all.”

For the most part, if you show a great attitude and you are willing and eager to learn, people in this industry will help you out.

A. The most rewarding for me has probably been working with my dad. We have a small, close-knit family so being able to work in the same building with him for I guess it was about seven years—you don’t want to take the time for granted.

He is still in the industry, still plugging along [laughter]. Another blessing is that he has been in the industry so long, and has pretty much seen everything. So being in the lighting industry, if you ever have a question, he’s going to have the answer. Or he can tell you whom you can call to get the answer.