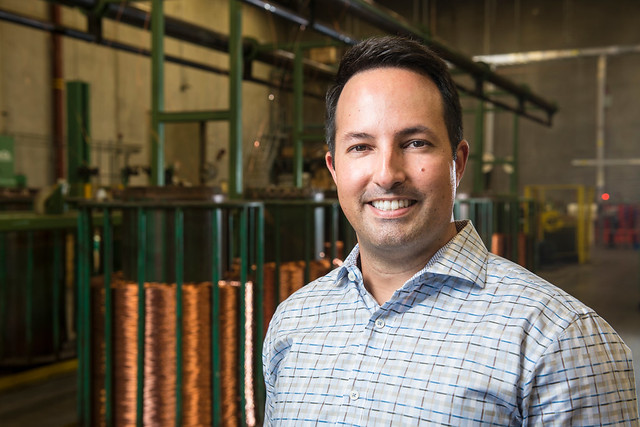 After graduating from Arizona State University in 2004, Mike Madjidi worked in retail management after an internship his senior year. After a few years he was ready for a career change when his father-in-law, who worked for 3M, suggested the electrical industry.

“He saw me working in retail and said, ‘You’re smart and good with customers. You would be great in the electrical industry,’” Mike said.

He was intrigued but admitted that he didn’t know a thing about the electrical industry. It turned out that a local branch of Consolidated Electrical Distributors had openings in its trainee program.

“I walked in there, totally unknowing and was put into the manager trainee program,” Mike said.

He started in the warehouse. Soon after, he moved to the sales counter followed by a stint with inside sales. He enjoyed the work and the learning curve, but over time, a certain restlessness was setting in, he explained.

“I told my boss, ‘Hey, I’m not going to come into the office today. I have to go make some sales calls,’” he said. “And he said go do it. So I started driving and chasing down any electrical trucks I saw, going to some of the big universities, just being proactive. I think, much like in life, nobody is going to hand you anything. You kind of have to go out and make it happen yourself.”

It was an assertive approach that has been effective in his career, Mike said, adding that his bosses at CED were supportive.

It’s also an approach he takes when mentoring young employees at Service Wire. He advises them to be proactive and not always ask for directions—avoid getting into a rut while waiting for directions that may never come.

Not that he’s advocating intruding on a colleague’s responsibilities. Mike is quite emphatic about that.

“Of course, you have to make right decisions. If you just go out and think, “I’m just going to take everyone’s customers,” that’s not what I’m trying to teach,” he explained. “What I’m trying to teach people is that, for example, one day tell your boss, ‘There is a new electrical house just down the street. I’m going to stop in there and see what they need.’ You just have to kind of take charge. But I’m not saying to step on everyone’s toes.”

In 2014, after a few years with CED, a headhunter called him and alerted him to an outside sales opportunity with Service Wire. Earlier this year he was promoted to director of sales.

“We manufacture at three different locations across the United States, in Arizona, Houston, and West Virginia,” Mike explained. “We sell to distributors such as CED, Wesco, Graybar, and Turtle & Hughes. Essentially, our products will get sold to power generation, solar, utilities, pump irrigation and heavy commercial. Those are the main verticals that we service.”

He and his wife Lauren enjoy participating in Spartan and Tough Mudder races, triathlons, hiking, and mountain climbing.

In August, the couple climbed Mt. Whitney in the Sierra Nevada Mountains, the tallest mountain in the lower 48 states, he explained, at an estimated 14,500 feet high.

A. Anytime that I meet somebody who is new or has just joined the team, I think about my experiences. My experience was nobody is going to hand you anything. You have to continue to push and continue to take charge in your own life and do what you need to do in order to get what you want. So you have to go out there and take it. Take the order, take the opportunity and say yes. That is what I try to impart on young people.

A. I probably would have appreciated hearing that. I think that career fairs at colleges are dominated by companies that people see on TV a lot and recognize. Electrical is an industry that is a little lesser known, one you kind of have to find your way into. So if someone came to me when I was in college and said that I was going to be in electrical distribution—I would’ve actually appreciated it, that there was some direction.

My family comes from a construction background. My dad is a senior project manager at Arizona State University. So I really enjoy construction, building things with my hands—those types of projects. To me, the electrical industry is as close as I’m going to get to being part of those projects, without being out there in the field and actually installing the stuff. So when I do six different solar sites across the United States I’m contributing to the growth of the country, contributing in that way and being part of growth and expansion as well of the electrical industry. So if back in college, somebody came to me and said that I would really enjoy being part of the growth of this country, I would’ve thanked them.