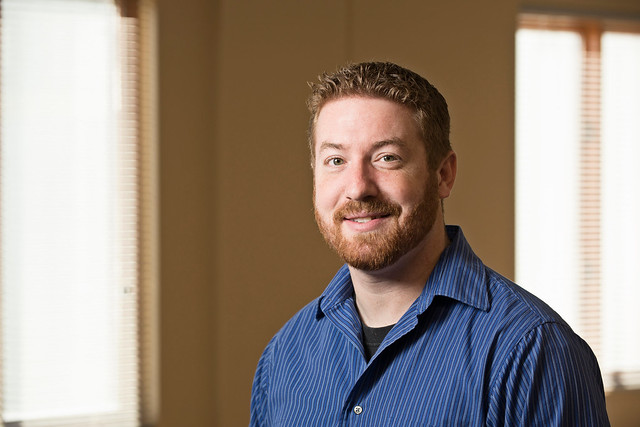 While Sean Retting was a kid, he and his family lived in Long Beach, California where his father was an electrician. So he found himself on the peripheries of the electrical industry.

When attending college at Tabor College in Hillsboro, Kan., he worked summers at Rexel’s branch in Colorado Springs, Colo., where his family had previously moved.

“My father got me in touch with Rexel with his contacts from being in the field,” Sean explained. “So I started with Rexel when I turned 18 years old.”

“It was very physically demanding,” he explained. “Instead of working out in the off-season, I worked in the wire room. I would come back to the team stronger than when I had left. So that worked out great for me.”

When Sean graduated in 2009, he returned to Colorado Springs and visited his Rexel branch, intending to tell them he had earned a degree and was interested in working there fulltime.

As fate would have it, his former Rexel branch manager was on vacation the day Sean dropped in.

“At the time Rexel was right across the street from Blazer Electric,” Sean explained. “So I walked out of Rexel and walked across the street to Blazer. I told them I had just graduated and had some experience in the field was looking for a job. And they hired me on.”

After starting in the warehouse at Blazer in January 2010, Sean began a steady rise through the company, working at inside sales, counter sales and warehouse manager among other duties, before being promoted to his current position, in project quotations.

He learned a lot at each position but two were particularly helpful.

“As far as product knowledge, it was definitely the counter,” he said. “As far as growth as a manager and as an employee, I would say warehouse manager.”

Sean was promoted to warehouse manager when he was 26 years old, a fairly young age in a position where he had older coworkers reporting to him.

“It presented some challenges just depending on the personalities,” he explained. “There were a couple of gentlemen who felt that their 20 years of driving experience superseded any knowledge that I had. That caused some struggles. A lot of times I found that you ask the guys, ‘Here is how we do things. What would you do to make it better?’ And if it is a viable solution and we can implement it, I think getting their input helps alleviate a lot of that problem.”

He and his wife, Amanda, have two children: a three-year-old daughter, Avery, and another daughter, Kinsley, eight months old.

Somehow, Sean also finds time to be in both a golf league and softball league at Blazer. But it’s their two young children that take up most of the Rettings’ attention.

“They take up all of your time. And I wouldn’t trade it for anything,” he laughed.

A. Never stop learning, especially with the way it is moving now with everything going to LED and the technological advances that are happening so quickly. Everything is now connected with WiFi. You can sit at a computer somewhere and dim the lights in Michigan at your factory if you want to. It’s incredible. So always stay on top of things and continue to learn because that’s what companies look for now. Contractors look for expertise, the people who are going to know a little bit more about the industry or be able to help them problem solve.

It’s amazing. When I first came into the business, everything was still fluorescent and incandescent bulbs. Now, I can’t remember the last job for which I quoted fluorescent. Everything is LED now and it’s amazing how in just five years everything has changed.

Q. If a young millennial were to ask you about the electrical industry, what would be your answer? How would you respond?

A. As far as defining our industry, we are continuing to try to be energy-efficient and provide lighting packages and gear packages that not only provide the best output in light but also energy savings. I think that is where the world is going.

This industry is not leaving. It is not going anywhere. There is always going to be the need for electricity and always be the need for power and light. It is an industry that will always be here. If you are willing to work hard and put in the work and the time, there are plenty of opportunities. You can see it in my journey to the business, starting by literally just delivering products and switches and things like that—and then just slowly moving up as my knowledge got better and as space has been available.