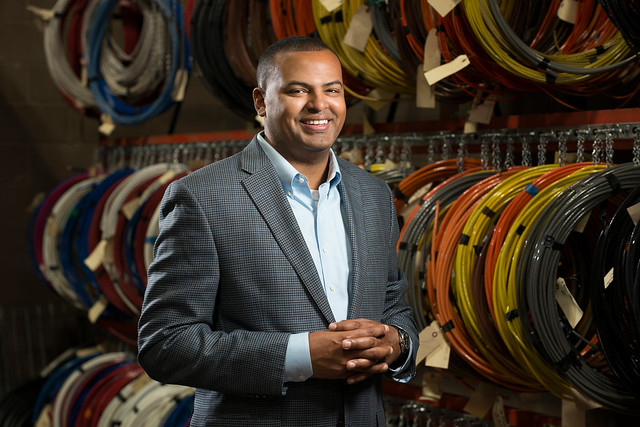 Thaddeus T. Jackson Jr. and his wife, Mikki, had moved to the Boston area from San Diego in 2011. He was then in the management training program of Enterprise Rental Car but was getting restless.

“I’d just moved here. I was raised in California and moved here to start our family,” he explained. “I was looking for a change. The management program at Enterprise was great but it wasn’t as exciting as my last job: teaching English abroad in Spain.”

“Mikki said to me, ‘Why don’t you try my industry? There aren’t many young people in it. The future is very bright.’ And in that kind of a roundabout way is how I got into it.”

Thaddeus graduated from Barry University in Miami, Fla. So just how did someone who had lived most of his life in warm-weather climates deal with his first New England winter and snowstorms?

“The first year I was here, my wife and her family kind of made fun of me because I looked forward to the winter. I’d run outside like a young kid and play in the snow,” he laughed. “But let me tell you, that got old very fast!”

Thaddeus came to Baynes in 2012 with little advanced knowledge of the overall industry, he admitted. In hindsight, this may have been a bit of an advantage for him.

“I had a clean slate,” he said. “I went into it with an open mind. A lot of people I speak to want to know what I do for a living. I tell them what it is and they have no idea. Not many people know about it. I think that’s what I like most about it, that it is kind of this hidden gem. We all need electrical and you need someone to supply it.”

Currently, Thaddeus is the director of purchasing at Baynes but has held roles in sales and operations.

“I purchase thousands of products from hundreds of manufacturers while being mindful of the financial and logistical aspect of the business. Anything related to inventory is basically right up my alley,” he explained. “Also, managing our vendor relationships, our partners in the marketplace. I manage those relationships, make sure we are in good standing with them and they are in good standing with us.”

Thaddeus is a mentor in the Reach and Rise program at his YMCA. He is also earning his MBA at Boston University, about 42 miles from the Baynes Electric.

“As the current generation starts to exit the industry, the field will present limitless challenges and opportunities,” he said. “I consider getting my MBA as putting me in a better position to capture any future opportunity. Plus, I love a good challenge.”

With what passes for his spare time, does he have room for any hobbies?

“No. Absolutely not,” Thaddeus laughed. “Right now my life is focused on raising my kids, working, and learning at school.”

A. I would say to just soak in as much knowledge as possible from people who have been in the industry for decades. Ask questions and be consistent. If you say you’re going to do something, do it. That is another thing I find in this industry – there is a lot of inconsistency. Generally speaking, though, the people who are labeled as “good at their jobs” are the people who will do what they say they’re going to do.

Let’s be honest, we are not in a very complicated industry. Louie Baynes, our second- generation owner, used to say, “We buy things, put them on the shelves and we sell them.” We aren’t performing open-heart surgery. I would just say be consistent, say what you are going to do, listen and own your mistakes.

A. I believe the future is bright and it is a sustainable industry. It will be around and the opportunity is there. It is in the numbers and the dynamics. You can see it. We are part of Affiliated Distributors, for example, and NAED. And when I go to those meetings, at some of them, I am the youngest guy by 20 years. I can’t say enough about the future outlook and the opportunities that will eventually come in time.