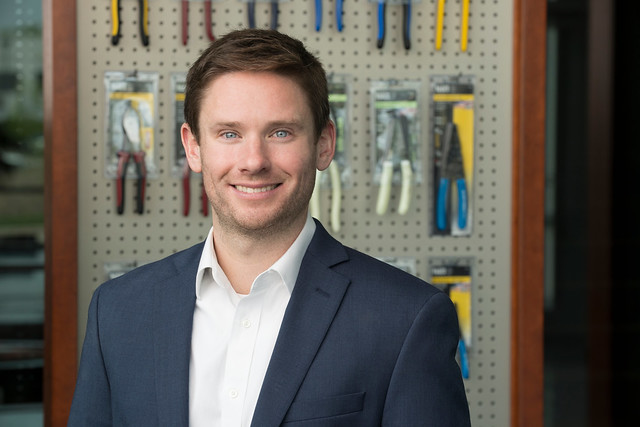 Klein Tools is a family-founded, family-managed business dating back to 1857. So you might say that Tom Klein, Jr. had his first introduction to the electrical industry while riding in the family car as a kid or sitting at the household dinner table.

“I started working summers in the business when I was 14 years old. I started off in customer service and then rotated between various departments until I was able to join Klein full time after I graduated college,” Tom explained.

In 2010, Tom graduated from Babson University in Wellesley, Mass., outside of Boston, and then began working full time at Klein. After his first two years, he also began working towards earning his MBA from Northwestern University’s Kellogg School of Management (2014).

When he started working full time, Tom obviously had more initial knowledge of the industry than most new college grads. There were no shock and awe moments upon realizing just how big the industry was—something for which he is grateful.

“There wasn’t any surprise. It was just kind of real life,” he said of those first weeks. “I felt like I understood a lot of the business. I mean there’s still a ton of things that I learned and am still learning now. I think for a lot of folks, graduating college and going into the real world is kind of a downer. But for me, it was the opposite. I had all this pent up kind of energy going into and starting my full-time role at Klein.”

As co-president of Klein Tools, Tom wears many hats. Working with customers, and customer focus groups, may well be his favorite, he said.

“I still go to our focus groups, not all of them but as many as I can. For the ones that I don’t go to, I watch the videos that we take of them so I can keep in touch,” he explained. “Whenever I can, I also get out into the field.”

“So our core customers are those that work with wire and cable,” he explained. “These would be folks like electricians, linesmen, HVAC professionals, ironworkers. Those types of people are our typical end-user base.”

As if he isn’t busy enough, Tom and his wife, Kerry, welcomed their first child, a daughter (Olivia) this past January. Very early January.

“She was actually the second child born in the Chicagoland Area for 2019,” he laughed.

With a busy company to help run, as well as a newborn at home, hobbies have been placed on the back burner for the foreseeable future.

“There’s not a lot of time for much else,” Tom said. “But because it’s a family business and what we love, and what we do—my career here at Klein is kind of my hobby. It’s also my personal passion at the same time. Pretty much every day I enjoy coming to work. But I would say travel is a hobby, time permitting. But you only get to do that occasionally.”

A. I would say one thing is to do something that you’re passionate about from a career standpoint. I think that in order to really be successful in your career and in your job, you’re going to have to work long, hard and smart. And if that’s something you’re not passionate about, you won’t be happy. That would probably be my biggest thing.

And the other thing is to never stop learning and keep in direct contact with your customers, especially end users. Don’t let yourself get separated from your customers.

Based on my own personal experience, having that direct channel of connection and communication with not just our distributors but also with our end-user customer base is one of the things that really has distinguished our ability to succeed in the marketplace.

Q. If a young millennial were to ask you about the electrical industry, what would be your answer? How would you respond?

A. I don’t know what the stereotypical millennial perception is. But there are some important things that would be worth noting. One is the industry’s criticality in the economy and society. One of the things that we like to say is that basically, America runs on electricity. And it’s electricians that build out the infrastructure that allows that to happen.

So, it is something that is very critical to society and the economy.  It’s something that I feel very fulfilled personally in playing the role that we do in the industry.

The other thing is that there’s probably a lot more innovation happening in the electrical industry than people realize. For example, look at how things have upgraded in lighting. It was incandescent then fluorescent now it’s LEDs. There are a lot of things happening out there that are very progressive, and I think on the surface people don’t realize they are happening. So I find it very exciting.