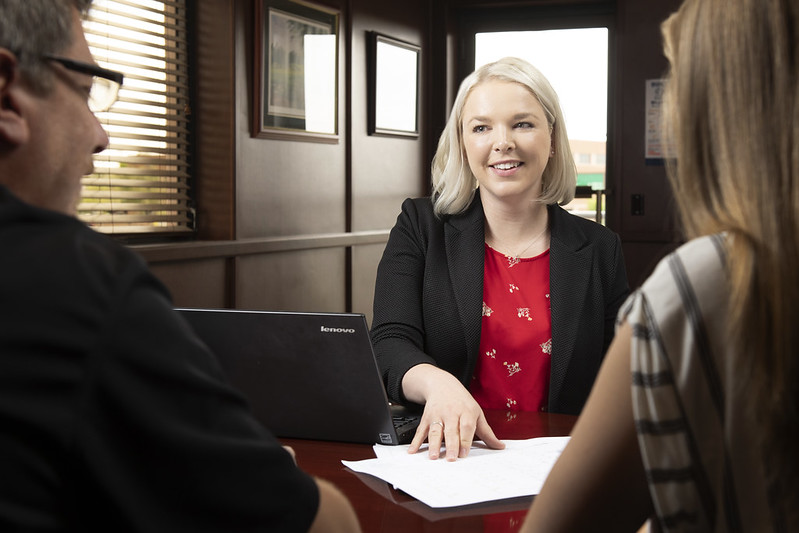 Some members of her family have worked for Border States, she explained.

“They always raved about what a great company it is to work for. So an opportunity came up and I started when I was 19,” she said. “I assisted with some clerical work here for the Phoenix branch.”

Ashlea works out of the Phoenix, Ariz., branch, near to where she was born and raised, she said.

“I am actually second generation, which if you know anything about Arizona, is pretty hard to come by. It’s a transplant state,” she explained. “I live and I work in the Phoenix office, but my customers are actually in North Dakota and Minnesota. We have local account managers that also support these large contractors.”

Unlike most newcomers to Border States, Ashlea really didn’t spend any time in the warehouse. But she was nonetheless struck by the vast product lines the company carries.

“I moved from administrative associate into a customer service representative function as part of our utility team. And it is pretty amazing to see the breadth of product that’s out there,” Ashlea said. “When you’re consistently looking in a catalog, it doesn’t do the material we’re selling justice. Where I’ve really gained the most is site tours and hands-on trainings.”

As she worked her way up in the company, Ashlea learned more at each stop.

“Every step of the way I’ve understood things a little bit more to get me to where I’m at. But I’m still constantly learning new things every day,” she explained.

In her current role as project manager for grid solutions, Ashlea and her group work almost exclusively with electrical contractors.

“We function as a national packager within Border States. And basically, my function is mostly in the renewables market,” she explained. “When they’re building a wind farm or solar farm, they need the materials related to that job. We’ll handle the ordering and logistics of it, but I’ll stay active throughout the job as far as changes in design go and miscellaneous fitting after the fact.”

Ashlea and Border States work with their contractor customers for the duration of a job in most cases.

“You’re talking large construction projects that could last anywhere from six months to two years. We support the contractors that are building the jobs,” she said. “We supply them with material and logistics coordination. We do some services as far as job trailers and kitting go. It’s really managing the life of the product from conception to completion.”

“This year we got to cross a couple of big shows off our bucket list,” Ashlea said. “We were able to see Billy Joel on his stadium tour and also Garth Brooks. And we flew out to Los Angeles to see the Rolling Stones in August!”

A. I would say be receptive and open and have a good work ethic. And a good attitude; attitude will go a long way.

Also, don’t be afraid to ask questions. That’s how you’re going to learn the most—I mean, besides making mistakes and learning from your mistakes.

I feel like another thing young professionals can do in the electrical industry is to jump in with both feet. In order to learn, you have to do it yourself. So just grind away at it and definitely find those resources internal to your company where people can help you with things. Most everybody within Border States is receptive to helping each other. What’s good for one person is good for Border States as a whole.

A. More flexibility. I think a lot of people have other passions outside of being career driven. They have a whole other life. So I would say to draw more talent into our industry, that companies need to be a little more flexible regarding working from home or work schedules of maybe 40 weeks; something along those lines.

And then obviously have something that draws a lot of people. Border States is an ESOP. So having a little more skin in the game and knowing that what I’m doing every day and what decisions I’m making that benefit Border States—that ultimately they come back to me as well. So having a profit-sharing program would also probably attract more diverse and talented people.