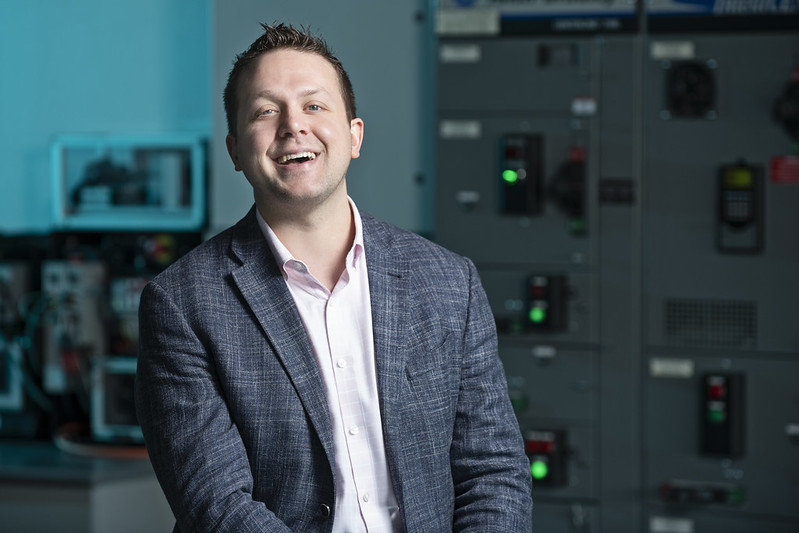 Cory Morris began his career at Graybar Canada as a co-op student. A friend of his who worked in HR there had been praising the company to him and he was eager to get the chance to see things firsthand.

“I really wanted to get into sales and marketing at the time,” Cory explained. “So I applied for it and I think my interview and what I was willing and able to put towards the team helped me land the co-op job.”

“I started as a marketing assistant, basically helping the marketing team with anything they needed,” Cory explained. “When my co-op position finished, I became a marketing coordinator at a time where the marketing organization was very small, two people.”

Once he came on board fulltime, Cory saw several attributes that made him believe Graybar Canada could be more than a post-college job and perhaps become his career, he explained.

“I was very lucky to find a business mentor within our organization who remains a mentor today,” he said. “He was instrumental in not only me staying but thriving. He really gave me that line of sight to the fact that I could go as far as I wanted to within the organization if I put in the time and effort.”

Realizing he had a lot to learn, Cory was also impressed at the chances for education and training his new employer offered.

“I really started seeing this industry and this company as a long-term path for me because they have a real desire to educate, empower and employ from within. They are really big into training, into education,” Cory explained. “Our last three top leaders in Canada essentially started in the warehouse. That was really enticing to me.”

And there’s a bit of local pride, too, in having a large company like Graybar Canada headquartered in Nova Scotia, he said.

“It’s rare for a national organization to be headquartered in Halifax, Nova Scotia,” Cory explained. “Typically in Canada, it’s headquartered in Vancouver, Montreal or Toronto. So I was excited by the fact that I could grow within a company that was headquartered here.”

As Graybar’s automation manager/Atlantic Canada, Cory and his colleagues work with a variety of customers and industries.

“If you were to narrow it down, there’s food and beverage, forestry, mining and tire and rubber,” he explained. “The forestry sector is massive, both in the cutting down of trees and the processing of those trees. Tire and rubber is with our Michelin facilities. We have three of them in our province. Also food and beverage along with mining, minerals and cement. Those are the key verticals that we have.”

“Essentially most of our mining is iron ore,” Cory said. “There’s a massive market for that globally. The province of Newfoundland and Labrador is rich with iron ore deposits.”

Cory and his wife, Gisele (who is a pharmacist), have an 8 month old son, Ellis.

A. I would say to find a mentor and someone who will tell you the truth, someone who will challenge you and whom you can trust. Take every opportunity you can—especially if it scares you. I’ve been consistently in on new opportunities every few years and most of the time when I’ve started these opportunities I really knew nothing about what I was getting myself into. But I love the challenge. I’ve never regretted that because if you’re in a good organization, there are people around you who will answer your questions, who are there to help you.

Also, don’t be afraid to be creative. Don’t just think about the industry and your position in a linear way. Really try to own both your horizons as well as the horizons of the company. Think about new and innovative ways to approach ideas and don’t be afraid, even if you’re relatively new to an organization, to come up with new ideas and sort of challenge the status quo. Those are my pieces of advice.

But I also think that the focus needs to be on laying a proper foundation now for the future. Not just bringing in more people that are visible minorities or women or whatever into the organization, but by trying to create a culture of inclusivity within your industry and organization.

Educate at the university and college level now so that more people are applying and getting interested in the industry. This industry has lots of opportunities for women, for minorities, etc. But they may not see our industry as a viable option because they don’t know about it. It’s not just bringing people in. It’s laying the foundation.