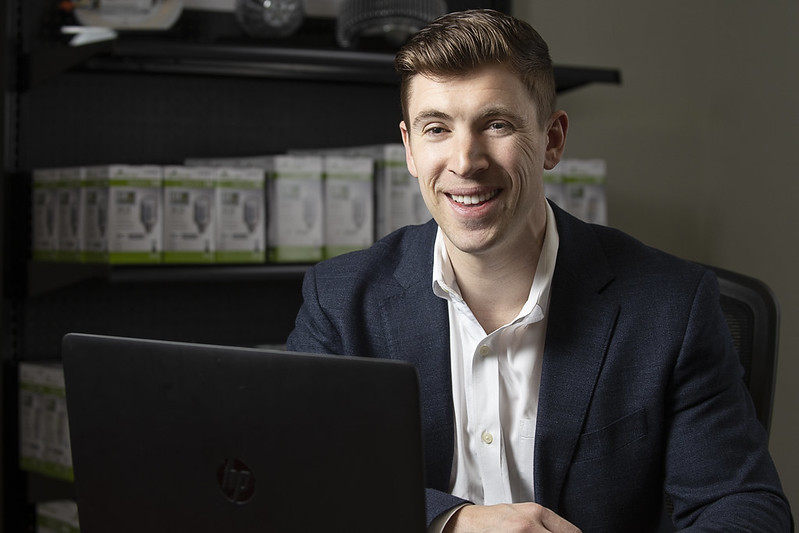 After graduating from Indiana University, Doug Knebelsberger accepted a job at Bridgestone, the tire manufacturer.

While he found the work enjoyable and challenging, after about five years there Doug found himself looking for a change. About that same time, Bridgestone announced it was moving its retail division headquarters from the Chicago area to Nashville.

“So I started to consider other options after that,” Doug explained. “I didn’t want to leave Chicago because that’s where my family, and my wife’s family, is from.”

There were also significant professional reasons, Doug said. For one, he’d been eyeing the lighting industry from a distance.

“I did want to work for a smaller, up and coming company where I’d have more of an opportunity to grow and have a significant impact on the company,” he explained.

But the emergence and rapid growth of LED lighting really caught his eye.

“The big draw was LEDs, and the lighting technology. I viewed it as a modern-day gold rush where it was going to be great from what I already knew and from talking with people and reading,” he explained. “But I also felt, and still feel, that it does have a limited time-span where the market is going to be thriving this much with LED products. So I didn’t want to miss out on that type of opportunity.”

So in August, 2015, Doug started at Light Efficient Design as a district sales manager.

“I felt like that was probably the best way to learn the business actually—selling the product and having that customer interfacing on a daily or weekly basis. That’s really where a lot of my marketing now comes from, knowing what people out there in the field are looking for and the challenges that they have to overcome,” Doug said.

Bridgestone and Light Efficient Design may seem like very different companies and industries. But from Bridgestone, Doug brought with him his experience with sales analysis and related metrics.

“It’s understanding the numbers and digging deeper to find trends in sales to be able to strategically make a game plan to go to market,” he said.

Doug explained that other skills he learned at Bridgestone were actually applicable to his work in his current role as vice president of marketing at Light Efficient Design.

“I would say that tying into my role now is our new product launches. At Bridgestone I was heavily involved with a one of their latest and greatest innovations, which was the DriveGuard tire,” he explained. “So I had a lot of experience bringing new products to market. That’s one of the things I do now that my role is marketing. We have a lot of innovative products that we bring to market every year and we want to make sure that we launch those products effectively and efficiently.”

Doug and his wife, Michelle, enjoy being near their extended families in the Chicago area. In addition, Doug enjoys golf as well as playing in weekly men’s league hockey games.

He is also an avid fan of Chicago’s professional teams—Cubs over the White Sox, he emphasizes.

A. I’d say one of the biggest things is to get involved, whether it’s via different organizations throughout the industry or just different opportunities within your own company. I’ve been going to NAED’s LEAD conferences for three years now. And I’ve been to some of the NAED regional conferences and it’s just good to get out and be able to meet people.

I understand that not everyone is going to necessarily have those opportunities. So that’s why I also kind of backed it up with suggesting they get involved at their own company. It could be extracurricular stuff or it could just be different projects that might be going on. But express interest in that type of thing.

I was fortunate here, being in a small company, where a lot of people wear a lot of different hats. And while I was in sales initially, I was kind of getting involved with marketing but also helping out a little bit in finance as well. So just getting involved, I would say, is probably one of my biggest things because that’s how you learn—by getting outside of what I would call your job description. So get outside of that and make an impact where you can.

A. I would say is it’s the people that you get to work with because you’re able to really build these relationships outside of the work hours; like the relationships that I’ve built over the past four years. It’s just when you’re able to talk to people that are more your friends than just customers or colleagues. I think that that really goes a long way. There are just a lot of good, genuine people in the industry.

That just makes it easier to figure out solutions to problems. When you’re able to work with good people, it makes the whole process a lot a lot easier and less strenuous.

Tagged with 2019 30 Under 35, 30 under 35, people
Joe Nowlan  is a Boston-based freelance writer/editor and author. He can be reached at jcnowlan@msn.com.

Get A Grip Business Blast: Ending Your Email With A Question