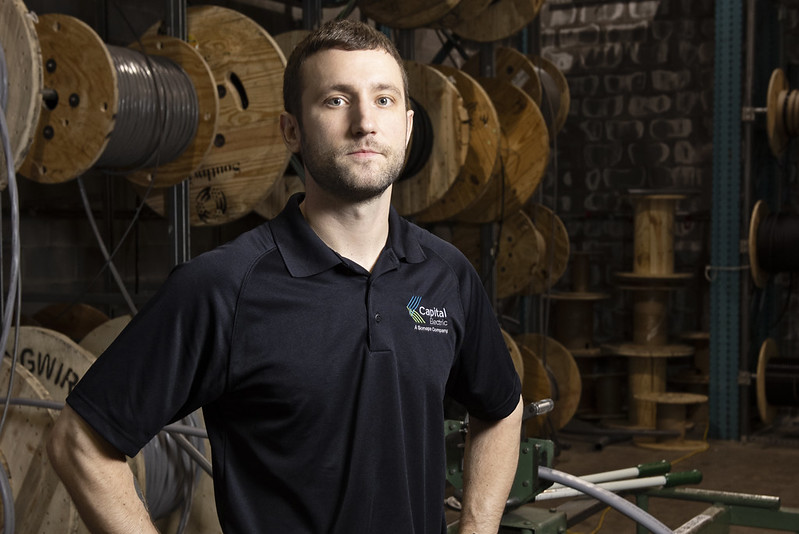 Eric Hysong heard about the electrical distribution industry before he ever worked in it. His father was in the industry and the now regional manager at Capital Electric (Sammy Twiggs) was a customer of his at one time.

“My father was in the industry for 40 years, mostly in purchasing. He was working for a manufacturer’s rep agency and that was when he called on Sammy,” Eric explained. “I’ve known Sammy since I was a teenager.”

Along with the usual steep learning curve any new employee faces, Eric also saw something else.

“I definitely realized there was plenty of opportunity to move up. It seemed like somewhat of a gray collar industry because it’s construction sales. We still deal with people in the more blue-collar side of the industry,” he said. “But being on my side of the counter, it was a little more white collar. So I enjoyed the blend of it. You had to learn how to communicate with all sorts of different people.”

Eric started fulltime in the warehouse. And even though he had worked there in his part-time days, the learning curve was steeper now.

“I started at the very bottom as just somebody who was pulling customer orders, running the occasional delivery out to customers and sort of gaining a little more responsibility,” he explained.

His supervisors soon found that Eric worked well with customers and had an affinity for sales and growing relationships.

“I really did enjoy talking to people and getting to know what they’re passionate about. And usually you can find some overlap with anyone where you both have a similar passion. You can form a bond there,” he said.

He realized early in his career what many have known for years—that the personal relationships with customers are still a vital part of today’s electrical industry.

Eric also saw that on display in his father’s career, he explained.

“One thing that’s maybe contributed/attributed to my success in a way is dad made lots of great relationships with people in the industry and the Richmond area,” Eric said. “So people knew my name and I usually get a warm welcome.”

Earlier this year, Eric was promoted to the position of contractor outside sales where he’ll sell to contractors who work in mostly the residential and commercial fields, he said.

Eric and his wife Rachel enjoy the Virginia beaches and outdoors. They also share a passion for music, with both being guitar players.

“She and I both play music. That’s probably my biggest hobby,’ he explained. “I’ve been playing guitar since I was 11 or 12.”

“Definitely a lot of different things, anything from jazz, heavy rock to blues,” Eric said. “My idol growing up was Jimi Hendrix. I really was influenced a lot by the blues when I was younger and even now still.”

A. There’s no substitute for hard work. The way I was raised is you wanted to be the first one there in the morning and the last to leave at night. I would also say definitely have a rock-solid personal life. Make sure everything at home is where it should be. Everything’s in its right place. That way, you’re not bringing any baggage to work with you. I mean, we all have something that at times in our lives is difficult to deal with. But try to leave that at home and just show up to work and get the job done.

Q. If a young person were to ask you about the electrical industry, what would be your answer? How would you respond?

A. I think I would talk about there being a lot of opportunity to work your way up. It seems like a lot of people that I see around me, in upper management levels, were the same as me. They started from the bottom and really, just through hard work and perseverance, moved on up the ladder. So I would recommend it to anybody looking to start a career. It’s a very honest industry where if you put in the work and you make the sacrifices and you develop, then you can be a master of your own destiny.

Tagged with 2019, 30 under 35
Joe Nowlan  is a Boston-based freelance writer/editor and author. He can be reached at jcnowlan@msn.com.