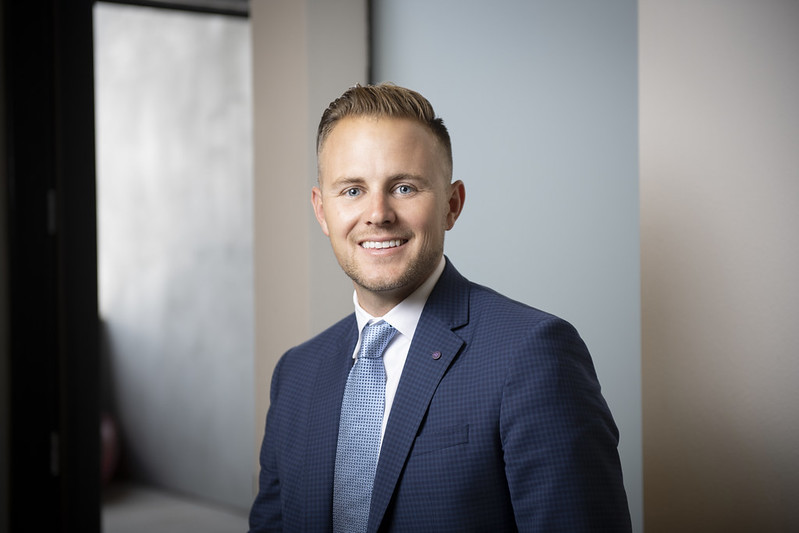 Born in San Juan Capistrano, Calif., Harrison Taylor attended the University of Southern California where he pursued a degree in International Relations. He was also captain of the men’s rowing team.

Harrison graduated with a BA in International Relations and minor in Spanish. As a senior, he was hired by Gexpro, after meeting them at a campus career fair, and moved directly into the lighting industry.

“Their sales management leadership program sounded like exactly what I wanted to do,” Harrison said.

While in that program, he learned all aspects of lighting, from the warehouse to office, from managing projects to making sales calls.

“It was a two-year rotational program that equipped me and prepared me for success in international business, sales and marketing,” Harrison explained.

In 2015, Harrison then worked as a project engineer and manager at RockForce, a California-based civil construction company.

After spending that time away from the industry, Harrison then worked at Wesco as an outside salesman. He was pleasantly surprised to get that call from Wesco.

“They said, ‘We understand you left the industry, but we wanted to call and see if you’re interested in jumping back into it,’” he said. “I missed that sales and marketing aspect. That was where my heart was.”

He would then accept a position at Graybar, where the national top sales representative mentored him, he explained.

While at Graybar, he developed an interactive tool to help contractors and developers visualize their lighting packages as well as analyze other lighting packages, making transactions with clients both accessible and informative.

Other sales representatives adopted his concept at Graybar and he has taught others how to streamline the process. He worked at Graybar until late 2018 when, he explained, he jumped at the opportunity to work at Southern California Illumination (SCI).

“I sell to a majority of the large electrical contractors in San Diego,” he explained.  “At SCI, we try to live by the tagline ‘inspiration, innovation, integration.’”

In 2019, Harrison worked on a large campus office building for a major tech company, a series of lighting projects improving multiple San Diego schools, and dozens of tenant improvements for new businesses. He has also supplied lighting for apartments, hotels and senior living communities, he explained.

Another interesting entrée on Harrison’s resume is his experience as a campaign manager in an election to the San Juan Capistrano city council in 2018—won by his father in a very close election, following a prolonged recount.

And Harrison remains involved in helping his town as, despite his busy SCI schedule, he is an elected planning commissioner for his hometown of San Juan Capistrano.

He and his wife, Anna, have two children: son Jack (4 years old) and daughter Olivia who is 2 years old. A new arrival, another girl, is due later this year.

A. I would suggest getting a mentor early on. That was a huge help for me—getting someone that cared about my success and cared about me as an individual. Someone whom you look up to and to whom you can relate to and strive to emulate.

Stay close to them, ask a lot of questions and do everything you can to try to have them help catapult you into relationships. This business is so relationship-driven and, no matter what, I don’t see that ever changing. It’s always going to be relationship-driven with our manufacturers, with our reps and with our distributors. It’s all about people’s comfort level of working together.

A. What I’m hearing in the industry is that there’s a huge labor shortage. I was just talking with a company’s upper management and they were telling me they’re having such a huge issue with finding good people. One of the things the upper manager said to me is that just showing up is literally half the battle. It’s hard to even get people to show up once they hire them! (laughing)

I think there’s a huge opportunity because we just need good people in the industry. I totally believe that there’s an abundance of opportunity, especially right now in the industry. And it’s just a matter of going after it and winning it. But how hard are you going to work? That’s really important at the end of the day. What’s going to determine your success? I mean, are you willing to put in the time and the hours? Then you can be tremendously successful. It just takes time and energy.

But we as an industry need to get the word out. I think if we collectively do better at marketing the industry through our networks and explaining what we do in our specific roles in the industry, then I think there’ll be more awareness and more excitement. Then we’ll be able to get more people into the industry and hopefully solve some of the labor shortage problems.