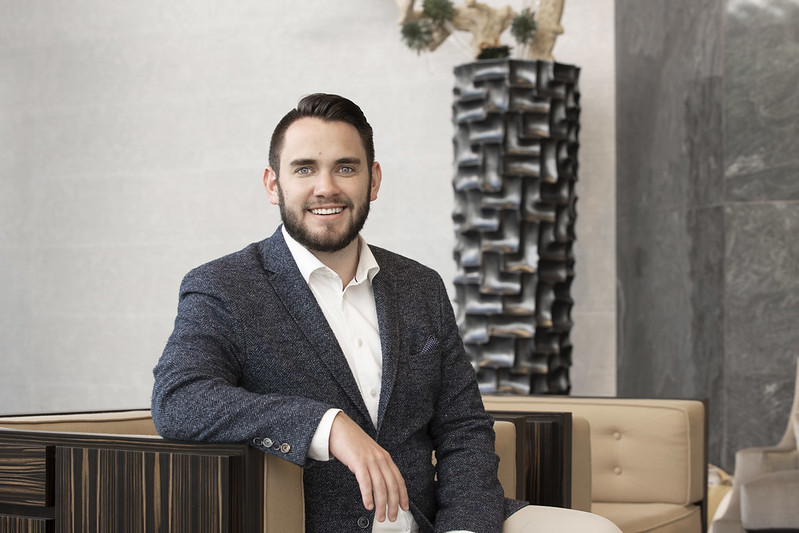 Thomas McShane was born in the United Kingdom where his father was a factory manager at TAMCO, the manufacturing wing of City Electric Supply.

In 2004, the family moved to the United States when he was promoted to Senior Group Manager of the company’s manufacturing facilities in Port St. Lucie, Florida.

It was in Florida that Thomas began to get an idea of his father’s work and the company’s customer base.

“Growing up, on every vacation we’d go to Disney World,” Thomas explained. “And as we’d be standing in line, my dad would be looking up saying, ‘That’s one of our emergency exit fixtures over there.’”

So a seed of sorts was planted. As he grew older, Thomas began to spend time at the company, eventually working part time.

“My last two years of high school, I worked for my dad during the summer, corrugate boxes, sweep the warehouse floors—basically just kind of doing some of the work that needed to be done around the factory,” Thomas explained.

Once he graduated from high school, Thomas began fulltime work at City Electric, with an eye on going to college.

As the recession of 2008 hit, Thomas was heading off to college. But he soon realized that he’d be happier back at City Electric.

“I went off to college but realized very quickly that it wasn’t really for me,” he said. “So I left college and came back down to Florida and then worked my way up through the organization from that point on.”

He worked his way up in the company, learning more and more at each stop. In 2010, he was returning from China with City Electric CEO Thomas Hartland-Mackie when the topic of social media came up.

“I expressed an interest in social media and brand recognition—doing something for TAMCO along those lines,” Thomas said. “Thomas offered me the opportunity, to see how it went over the next couple of months and go from there.”

Thomas put together various social media pages for City Electric, he explained, and began to build some content. Things picked up fairly rapidly and soon he was asked to make a presentation to the company vice-presidents, walking them through what had been developed to that point.

“I think the conversation went, ‘It looks like you’ve got yourself a new job,’” he laughed. “It was important for the business that we created a social presence. I’ve always said that there’s a conversation happening about you and your brand online. The question is, do you want to be a part of it?”

“From there it evolved into a marketing department of 30 (for CES – the rest work for our ad agency and print company) or so people today,” Thomas said.

Thomas and his wife, Amber, try to get away on vacation a couple of times a year, he said.

“We always seem to end up at the same place, which is Disney World. That’s where we got married,” he laughed.

A. Listen more than you talk. And then there’s just the simple matter of treating others how you want to be treated. I think you’ll go a long way by following those two simple rules. I think that’s a huge piece.

I think if you can service the heck out of your customers—which kind of falls back onto treating others the way you want to be treated. Service people the way that you would want to be serviced. If you can help people the way you would want to be helped, and then if you can listen, be a sponge and absorb as much information as you can—whether that’s on the trade counter, a job site or in a meeting with a vendor. Just listen and listen and then absorb as much as you possibly can.

Q. How do you use social media in your work? Is there any particular subject that a company should never post about on social media?

And we like to be able to try and curate some of those posts or we’ll reach out to individuals based on those posts and create more articles or blog content based on that. But for us, it’s definitely more of a listening tool. It’s never been about collecting followers for us. We actually want to have organic, real, true conversation. That’s really what it’s been about for us.

In regards to things to steer clear of—I think that really comes down to an organization’s ethos or mission statement. Obviously, the goal is to try and always stay on brand. But I also think that it’s one of those things that become challenging. Don’t talk just to talk. Don’t compete just to compete or post just to post. Make sure that it’s definitely quality over quantity.

Tagged with 2019 30 Under 35, 30 under 35, City Electric Supply
Joe Nowlan  is a Boston-based freelance writer/editor and author. He can be reached at jcnowlan@msn.com.

Thanks for an enjoyable article on Thomas- in nearly 40 years in this industry I have never met a more talented or creative person.

Nice read. I’ve been following Thomas’ career for a few years now. He is truly an inspired leader, one of the best in the industry. Looking forward to see what he does next. – Cheers!